Each year, the Boulder JCC selects honorees to be recognized for their commitment to the values of the JCC and dedication to creating positive change throughout Boulder County. At our 13th Annual Reflections at the Boulder JCC on Saturday, February 22, Emily & Jonathan Cooper and Barbara Steinmetz will be honored.

Barbara Bandler Steinmetz came to this country as a ten-year-old immigrant, having escaped deportations in Europe, and after finding safe haven for four years in the newly founded Settlement of Sosua, set up to save Jews, in the Dominican Republic. It was with the support of the Jewish community and its agencies that her family made it to the US, found jobs, and eventually settled. 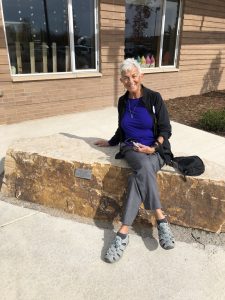 Upon arrival in the US, Barb and her sister were whisked off to the Boston JCC’s summer camp. They knew no one and didn’t speak any English. That summer their fellow campers helped them learn English. Camp offered the opportunity to excel in sports and exposed them to what it means to be a Jew. In the Dominican Republic they had attended Catholic boarding school for four years, where their lips were sealed, as they were not to tell anyone that they were Jewish or European.

Barb and her family spent their early years in the US moving from one city to the next and attending different JCC summer camps wherever they were. They eventually settled in Detroit where her mother ran the lunchroom at the JCC. Each day after school and on weekends, Barb took the streetcar to the JCC to help her mother in the lunchroom, by serving the large dinners her mom catered. The JCC became her “home in America,” where she spent all of her free time. Hanging around the JCC for hours on end, she played drop-in basketball, took piano lessons, modern dance classes, and eventually performed with the JCC Dance Company.

Barb met and married Howard while still a teenager and college student. They moved to Saginaw, Michigan when she was a young mom. They built a life there around Jewish community, where the synagogue was the center with no JCC. They assumed positions of leadership and were committed to sending their daughters and other children in their community to Jewish summer camp each year. Their community provided the umbrella under which the Steinmetz family became devoted to Jewish life, friends, and family. The Jewish community held an importance which influenced her daughters as they took their place as adults in the Jewish World. Barb’s daughter, Julie, has spent most of her career in the Jewish service world. Her daughter, Ivy, lived in Israel for several years and worked at a JCC in New Jersey as a youth director, leading teens on Israel summer programs, and daughter, Monica, became the convener of a group of people in Evanston, IL to form an alternative Jewish community. 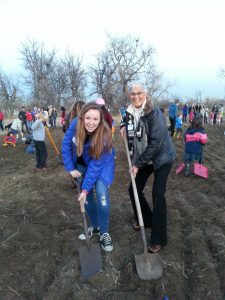 When Howard and Barb moved to Boulder in 2006, it was the JCC which provided them with the social and intellectual programs that integrated them into the community. Barb views the JCC as the Boulder Hurricane—the eye of Jewish life is at its vortex swirling around—early childhood center, JFS, ACE, music, celebrations, art exhibits, inspirational speakers, space to serve the greater Boulder Community programs, a bold beacon of light for the City of Boulder. The JCC is the magnet which draws new residents to the community, welcomes and embraces them while providing needed services and a trusted place for consultation.

Barb considers the JCC the central Jewish ‘address’ in Boulder. There is a Jewish presence, a Jewish influence, a Jewish character which adds to the diversity and the richness of life in Boulder, Colorado. This community adds to the quality of life for the citizens of Boulder. We are a positive, powerful presence. The JCC is here to serve everyone, affiliated or unaffiliated, and believes that our doors are open as harbor of shelter, safety, conviviality, purpose, service, generosity, and warmth.

Barb is humbled by this honor and wishes Howard were here to share it with her. She hopes that this recognition will encourage others to get involved with all that the JCC has to offer. She is delighted that her children and grandchildren and friends in the community will join her at Reflections to accept this honor.

Stay tuned for an upcoming article on honorees Emily and Jonathan Cooper.

Kai Murga-Canales is the Director of Marketing and Communications at the Boulder JCC. Originally from Miami, Kai moved to Boulder from Atlanta, where he worked for the Jewish Federation of Greater Atlanta and Limmud Atlanta + Southeast.
Previous Do A Mitzvah at the Boulder JCC
Next Israeli President Reuven Rivlin Marks Jewish Disability Awareness, Acceptance, and Inclusion Month; Meets Soldiers with Disabilities