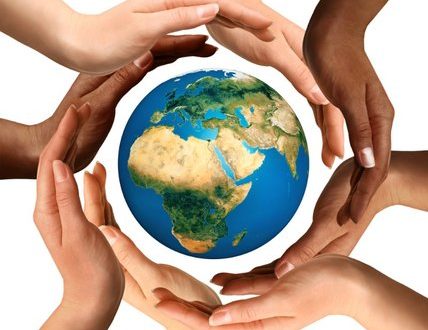 A Declaration of Interdependence: Chanukah is Unity in Diversity

Cara Alhadeff December 14, 2020 Chanukah Comments Off on A Declaration of Interdependence: Chanukah is Unity in Diversity

2020 is coming to a close—a year of staggering political debacles further catalyzing human and ecological catastrophes. Convenience-culture has kick-started a new geologic age. Transnational corporations and consumer-driven societies have launched this Anthropocene Era. Our kakistocracy (a system of government which is run by the worst, least qualified, or most unscrupulous citizens) is the script for many SNL episodes, while Black Friday and Cyber-Monday feed our consumer-addicted frenzy. Clearly, we haven’t yet learned our lessons from Maimonides, the 12th century Sephardic polymath, or for that matter, from Galileo (imprisoned by the Spanish Inquisition). Both philosopher-activists declared that the rest of the cosmos actually does not revolve around humankind.

“Maimonides, who integrated medieval philosophy and Judaism, warned against seeing everything in anthropocentric terms, suggesting instead that we think of the whole creation and each creature in terms of itself instead of in terms of its usefulness to us” (Rabbi Seidenberg,  http://multi.jewishpublicaffairs.org/coejl/resources/cosmology-and-biodiversity-the-divine-purpose-in-creating-many-species/). He described the imperative of co-evolution: “We need to grow up in our relation to the Earth, to enter into mutual relationships, to cherish kinship with all life, rather than reward exploitation. Shiluach haken [the Hebrew term for kindness or compassion toward non-human animals] is one commandment that offers us a window into our own souls and a yardstick to measure how far we have come along that path.” (Rabbi Seidenberg, Kabbalah and Ecology: God’s Image in the More-Than-Human World).

Yet, many of us refuse to be deceived; we refuse to buy into the illusion that our actions do not directly impact others. Instead, many of us are celebrating a kind of Declaration of Interdependence. Traditionally, Hanukkah has been taught as a religious and cultural symbol of overcoming persecution and overwhelming odds; of the underdog persevering and overthrowing tyranny. The lesson of Hanukkah that I am suggesting we consider for 2020-and-beyond is to collectively and individually take responsibility for our consumer habits in order to hold accountable Agribusiness, Big Pharma, the Fossil Fuel Industry. We 99% are not victims of the 1%. I suggest that we refocus on our own agency and how it impacts our global interdependency. Rather than depleting our energy as we demonize corporate power (we already know how vile it is), what if we were to look at possibilities of change in our own lives? Model for ourselves, our children, our communities what it means to live an ethical socially, ecologically-conscious daily life—what Paul Hawken calls a “feast of solutions, of possibilities”? I suggest that commitment would honor our history of the Hanukkah miracle.

The story of Hanukkah tells us that when we act together, a seemingly powerless, small group of people can actually overcome seemingly intractable adversities. By placing our illuminated menorahs on windowsills to be seen by all, we exhibit how individual and social bodies are intricately bound together. This kind of Jewish practice demonstrates how the personal is political, how living our individual ethics can be used to heal the earth from our self-induced global climate crisis.

In spite of our addiction to entitlement, many of us do take a stand on behalf of the underdog. This value is rooted in Jewish scripture where it speaks repeatedly about the obligation to support the widow, orphan, and stranger that live among us. One example of such empathy is the Endangered Species Act (ESA). As a society, this law commits us to defend every constituent of the complex, interconnected web of life. Despite the ESA being a manifestation of humanity’s best traits, it is imperiled in this divisive political climate. How can we collectively uphold commitment to sacred activism—a kind of Declaration of Interdependence?

One relational perspective you may offer is how cultural extinction of ethnic minorities and extinction of animals go hand-in-hand. For example, just as Jews have been vilified cross-culturally over the centuries, bats, too, have been scapegoated and stigmatized. Just as humans have targeted the bat as a pariah in the animal kingdom, as a Sephardic woman, I too have experienced the phenomenon of being a social outcast, and feel a deep affinity for this stereotyped little furry creature. Bats have been misunderstood, feared, and persecuted, yet we depend on them as pollinators of avocados, bananas, mangoes, figs, cashews, almonds, agave (the $9 million tequila industry), etc., for their rich fertilizing guano (bat-poop—California’s marijuana industry relies on it), and insect control of crops (bats protect coffee plantations, strawberry and rice fields, walnuts, cotton). Bats and thousands of other threatened and critically endangered animals across the world, suffer from habitat-loss, convenience-culture, and disease. In order to challenge uninformed mythologies, we must consider how diseases like the white-nose syndrome (www.whitenosesyndrome.org) plaguing bats throughout the U.S., directly affects each one of us. This is the biggest wildlife catastrophe in 100 years.

I hope that by making connections between marginalized peoples and threatened animals, citizen-activists will generate a sense of empathy that inspires them to take action. The Sephardic history of Convivencia (interfaith coexistence) offers a conceptual model for this social permaculture. Convivencia highlights unity in diversity (one variation of biodiversity)—a foundation of the ESA. In contrast to forces that drive our transnational corporate Anthropocene Era, Rabbi Seidenberg shares a criteria of biophilia: by “binding ourselves to other creatures (…), we are enriching the meaning of our own humanity” (171).

Recognizing how Convivencia and Jewish ecological practices intersect with indigenous environmental philosophies that view our fellow animals and all forms of nature (trees, forests, rivers, mountains, oceans, lakes, deserts) as family demonstrates our intricate symbiosis, and can spur individual and collective agency. Shiluach haken and tzaar baalei chayyim (the Jewish prohibition against causing pain to animals) are at the root of empatya (empathy). Acting on this Tloot Hadadit radikali (radical interdependency)between biodiversity and biophilia is essential to understand ourselves in relation to a greater whole, and enables us to support the ESA—a federal commitment that has saved 99% of the species it has protected. Hanukkah teaches us that we are not victims; we are not at the whim of corporate tyrannies; those most vulnerable can be empowered if we acknowledge how we are all interconnected.

Cara Judea Alhadeff, Ph.D., Executive Director of Jews Of The Earth (JOTE); author of Viscous Expectations: Justice, Vulnerability, The Ob-scene (Pennsylvania State University Press, 2014) and Zazu Dreams: Between the Scarab and the Dung Beetle, A Cautionary Fable for the Anthropocene Era (Eifrig Publishing, 2017). www.carajudea.com; www.zazudreams.com
Previous Spend Christmas with an Exclusive Presentation of “Crossing Delancey”
Next The Enduring Value of Our Chanukah Lights

On Tuesday night, November 30, 2021, the Jewish community gathered at Winterskate in Louisville to …

Column: What Are We Really Celebrating on Chanukah?

Chanukah is a holiday when Jews celebrate their victory over the Seleucid Empire, which attempted to entrench the Hellenistic culture and belief system among the Jews in the land of Israel.