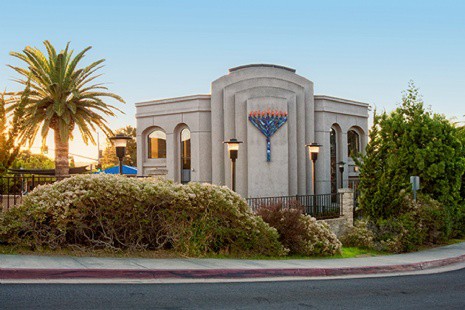 Morah Yehudis Fishman May 2, 2019 Guests and Blogs Comments Off on The Rebbe And Me: Post Poway Reflections

About 50 years ago, a young teen age girl of 19, was sitting and crying on the stairs of Chabad international headquarters, known as 770, in Brooklyn NY. She was about to be sent to Israel to meet sight unseen a prominent Sefardic rabbi for the purpose of marriage. But she was not sure if it was a wise choice. She wanted to get advice from the one rabbi who many considered the wisest man in the world, the seventh Lubavitcher Rebbe, Rabbi Menachem Mendel Shneerson. As a lone student in a teacher’s seminary, she felt she had no one else to turn to. She had no idea how to get an appointment, but as Divine Providence would have it, an elderly, bent over chasid, Rabbi Hodakov, who turned out to be the Rebbe’s private secretary, noticed her, and got her an appointment for the following night.

I was that teenager. When I explained my predicament to the Rebbe, after calming my trembling knees, he gave one of his beautiful, fatherly gentle smiles and said in Yiddish, You are here and he is there. You are Ashkenaz and he is Sefard. ‘Take this off your agenda.’

From that moment on, the Rebbe was my ‘go to’ rabbi. Once he even sent me to his private doctor who ground up some healing herbs for me on the spot!  Little did I realize at the time, the Rebbe’s brilliance or the huge impact he would have on the world through the vast network of Chabad houses that he started and continue to grow today. As the Zohar says and as taught by the Rebbe’s first ancestor, ‘Greater are the righteous in passing, than even in their lifetime.’ Once their souls leave their bodies, they are no longer confined by the Mitzrayim, the Egypt like, constraints of this world.

So even now, many years after the Rebbe’s passing, we find Chabad houses thriving in the most remote corners of the world. In fact, here in Boulder Colorado, we find two welcoming and hospitable Chabad houses that will be having special services this Shabbat.

You know, some people think these Chabad houses are funded from central headquarters. Not true. When other young couples are relaxing on their honeymoon, these followers known as shluchim, happily and with extreme dedication choose to go to places where they don’t know anyone, and sometimes don’t even know the language. I heard that once a shaliach expressed his worry about going to a country with a language foreign to him. The Rebbe replied: ‘What are you so concerned about? I know 26 languages; go out and learn!’  In addition to their mandate to teach Torah to adults and children, to establish shuls and mikvas, and have dozens of guests for Shabbos meals, they have to raise their own funds from people they meet.

This week a beautiful woman, who was perhaps the biggest and most loving supporter, philanthropically and personally, of one of these remarkable Chabad houses in Poway, California, was violently torn from this world by a nineteen-year-old virulent anti-Semite. Sixty-year-old Lori Kaye died by a direct shot from the rifle of the assassin. The rabbi, Yisroel Goldstein, was about to conduct the Yizkor service, the memorial prayer for departed relatives, on the last day of Passover when he came face to face with the killer.  This happened when he was just preparing to read from the book of Isaiah about the Messianic vision of a world filled with such peace that a wolf will lie down with a lamb. Even after he was shot, like a faithful shepherd, Rabbi Goldstein guided everyone outside and continued to give them strength and consolation. You can find all the details on the web; I urge you to listen to some of his interviews that span a gamut of emotion from intense grief to expressions of incredible strength and faith.

Of course, we are all troubled and affected by escalating assaults and destruction of places of worship throughout the world. As Father Desbois who spoke here in Boulder said recently, ‘We have to build a new generation who can be conscious of mass crime.’ As Rabbi Jonathan Sacks pointed out, ‘anti-Semitism may begin with Jews but it never ends there.’

Together with rising anti-Semitism, there have been attacks on Christian and Muslim sacred spaces, as in Sri Lanka and New Zealand, and black churches in the USA. Places that should be the safest refuges, have become endangered, and Chabad houses among them.

This was not the first time, though G-d willing it should be the last time that a Chabad house was attacked. In 1956, in the holy land, terrorists broke into a school in Kfar Chabad and killed 11 students. Then we know about the massacre in Mumbai, where several guests as well as the young Rabbi Holtzberg and his wife were gunned down, as a very courageous Indian nanny, Sandra Samuels, rescued the young two-year-old Moshe, who is now a bar mitzvah. Also, just this year, five thugs broke into the Chabad house in Nairobi, Kenya, attacked Rabbi Shmuel and Chaya Notik, and stole thousands of dollars of valuables in their home. And only yesterday, a young Hassidic man was accosted on the streets in Crown Heights.

How are we to understand this? Logic would expect these devoted shluchim to cave in or in the least, go dark, and not be so prominent. But davka, davka, they come back with greater resiliency and determination to continue their holy work of bringing light into a darkening world. The Torah verses of the enslavement in Egypt, which is the prototype of all exiles until the Messianic age, reads: ‘As they continued to afflict them, so they continued to increase and spread out.’ This verse can apply to the Chabad houses all over the world.

Today as we recall so many victims of the holocaust, we too are asked to remember. But memory cannot be a mere intellectual or even emotional experience. When the Torah says many times, that G-d who is beyond time and space, remembered, it cannot just be about recall. The sages tell us the divine memory means that G-d takes action. So too are we meant to take positive action from the stirrings of our memories. What are the actions? The Jewish nation also had a queen during a time of threat similar to the Holocaust at the time of Purim: Haman’s decree of total annihilation. How did Esther react? She was willing to risk her life and soul to engage in the diplomacy of interceding with the king on behalf of her people. But she also insisted the Jews utilize their most potent weapons, to fast and pray for three days and nights. Esther overcame anti-Jewish by promoting more Jewish!

Counter intuitive, you might wonder? But notice that Rabbi Akiva compared the Jews to fish in the sea: If the waters are dangerous, how much more are the fish endangered if they abandon the waters. If the world is a perilous place for Jews even when they adhere to Torah, how much more unsafe is it, if they disconnect from Torah.

About Jews in the Holocaust, you may ask? The Lubavitcher Rebbe addressed this question. He said that the Holocaust was a horror whose reasons we cannot yet fathom. In one of his rare moments of anger, the Rebbe even railed against rabbis who considered the Holocaust retribution for transgressions. The Rebbe called the victims kedoshim, holy ones, and referred to the survivors as, Ud Mutzal Mei’aish,’ brands plucked from the fire. Indeed he established Chabad houses as the Jewish response to threats of destruction.

The rebbe spoke about why good in the world must ultimately prevail. The evil in each generation eventually dissipates but the good of all ages is cumulative and must ultimately reach a critical mass where evil implodes out of existence. And, as both the Rebbe and Rabbi Goldstein pleaded, it can all start with children all around the world, to be provided with a moment of silence to contemplate a higher Being who guides the world and purpose in their lives.

Doing Jewish does not conflict with heightened security measures. Similar to personal health care, the Rebbe always recommended consulting with experts in their field, in addition to taking on more Jewish practices. I think this is good advice for all of us, especially in these pre-Messianic times. We are not meant to sit back passively and wait for the promised utopia. On the contrary, it is our good deeds that hasten these prophecies. As we begin reading at the conclusion of each chapter of Pirkei Avot, Ethics of our ancestors, this Shabbat, ‘G-d desired to merit us by gifting us with a plethora of mitzvah opportunities.’

To extend the words of Rabbi Goldstein, we are all living on borrowed time. The fifty bullets that were miraculously jammed in the assassin’s rifle were meant for all of us. So what do we do with our added gift of life? Go to shul this Shabbat and take someone else with you. Perhaps you’ll find an answer. Lori’s Hebrew name is Leah. Our matriarch Leah was the first to express gratitude to G-d for giving her an unexpected fourth son, Judah. From Judah comes the name Yehudi- Jew. My grandfather, whom I am named after, was Yehudah. A Jew is one who expresses gratitude for gifts of life, and defends the divine image in all of humanity.  As the Rebbe spoke so paternally to me, the Torah records G-d’s parental advice: ‘I place before you life and death; CHOOSE LIFE. Choose hope, choose light, choose love and compassion,’ and as the Rebbe would frequently plead with the entire human race, choose random acts of kindness.

I have been teaching Torah and Chassidic writings for over forty years to students of all ages and backgrounds, both on the East Coast and the Midwest. I have been a director of several Jewish organizations in Santa Fe and Colorado. My articles and poetry on a wide variety of Jewish topics have been printed in many publications, and also are available online.
Previous Weekly Edition: May 3rd, 2019
Next Opinion: A Shabbat Challenge