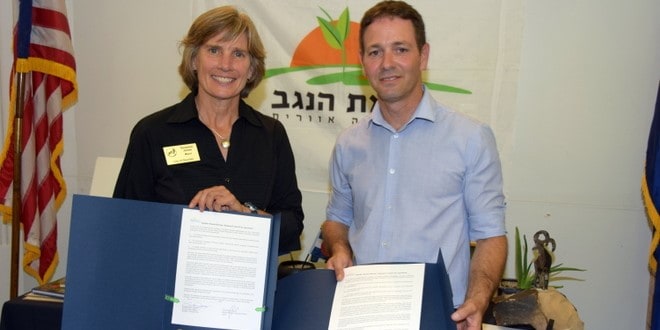 Mayor Suzanne Jones of Boulder and Mayor Eran Doran of Ramat HaNegev met at Boulder’s Municipal Building Tuesday night (September 10) and made it official: they signed the Sister City paperwork and exchanged gifts to seal the deal.

Mayor Doran spoke of first coming to Boulder in 2005 as part of a Search and Rescue joint training exchange and immediately recognizing that Boulderites and residents of Ramat HaNegev had much in common, even as their mountain and desert environments contrasted. He also pointed out that our two regions share common interests and expertise we can share: solar energy, water management and the environment.

Mayor Jones, expressing her interest in visiting Ramat HaNegev in the future, talked about how the Sister City program is really about people-to-people contacts, and that all 10 of Boulder’s Sister Cities bring interesting and unique ideas and vision to Boulder. Councilman Yates, who has visited Ramat HaNegev, talked about how he instantly felt at home there, and the warm and friendly people he met.

Adler told the group that the Boulder – Ramat HaNegev Sister City Initiative is working on a project involving the Search and Rescue Teams once again, and that more information would be available later this year. You can contact the organization at info@bouldernegev.org and sign up for its newsletter here.

Mayor Doran plans to meet with Governor Jared Polis and Attorney General Phil Weiser in Denver on Wednesday to discuss Colorado’s legalization of cannabis and its impacts on the state, as Israel recently decriminalized personal possession and use of cannabis, and has had a growing medical cannabis industry since legalization for medical uses in the 1990’s.

More photos can be seen here.

I've been writing things since grammar school, and served as a writer, photographer and/or an editor on my junior high and high school newspapers; the Daily Trojan at USC (where I earned my journalism degree); the student newspaper at the Anderson School at UCLA (where I earned my MBA); and written and edited countless business documents and presentations in the ensuing twenty years. I've been involved Jewishly since my bris and in Boulder since 1995. I'm married to my Executive Director Cheryl, and we have two children, Lauren and Ethan.
Previous PJ Library Reaches 3,000th Colorado Family
Next Weekly Edition: September 13th, 2019