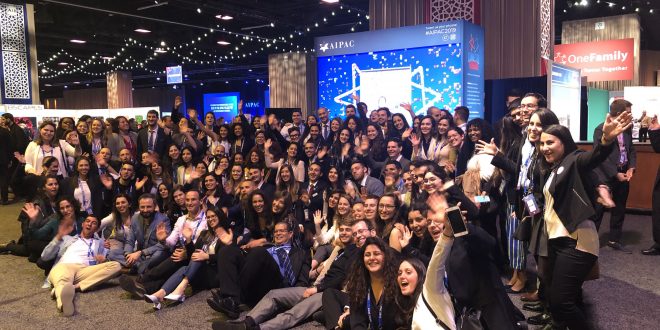 Photo credit courtesy of The Jewish Agency for Israel.

A delegation of 120 Shlichim (Israeli emissaries), including Denver’s own Osnat Fox, representing The Jewish Agency for Israel are attending the 2019 American Israel Public Affairs Committee (AIPAC) Policy Conference from March 24-26 in Washington, D.C.

More than 2,000 Jewish Agency Shlichim travel to Diaspora communities in 150 countries to strengthen Jewish identity by bringing Israel to local communities, promoting Israel experiences, and facilitating Jewish social activism. This includes the college campus efforts of the Jewish Agency Israel Fellows, who serve for one to three years at colleges and and universities worldwide with the goal of empowering student leadership and creating Israel-engaged campuses. During this sensitive time for Jewish unity, Shlichim represent a crucial bridge between American and Israeli Jews.

The emissaries’ attendance of the AIPAC conference — the largest annual gathering for supporters of the U.S.-Israel relationship — was their latest step to advance that mission. Upon their return from the AIPAC conference, the Shlichim will infuse the communities where they serve with key experiences and insights on the relationships between the governments and Jewish communities of the U.S. and Israel, strengthening their ongoing Israel education efforts.

They call me "NewsHound IV," because I'm a clever Finnegan, sniffing out stories all over the Boulder area. I love Jewish holidays because the food is GREAT, especially the brisket. Well all the food. I was a rescue pup and glad to be on the scent!
Previous CU Boulder Hillel Announces Holocaust Remembrance Week Programs
Next Spiritual Support Group for Mental Health Meeting Dates for April