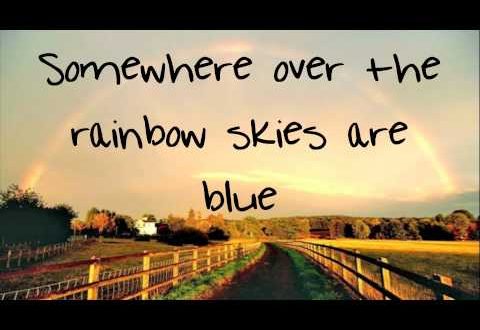 Somewhere Over the Rainbow

Staff January 25, 2018 Arts & Culture Comments Off on Somewhere Over the Rainbow

Did you know that “Somewhere Over the Rainbow” was written, not about the mythical Land of Oz but, the homeland of the Jewish people?

The lyrics were written by Yip Harburg, the youngest of four children born to Russian-Jewish immigrants. His real name was Isidore Hochberg, and he grew up in a Yiddish-speaking, Orthodox Jewish home in New York.  The song’s music was written by Harold Arlen, also a cantor’s son. His real name was Hyman Arluck, and his parents were from Lithuania.

Together, Hochberg and Arluck wrote “Somewhere Over the Rainbow,” which was voted the 20th century’s No. 1 song by the Recording Industry Association of America and the National Endowment for the Arts

In writing it, the two men reached deep into their immigrant Jewish consciousness — framed by the pogroms of the past and the Holocaust about to happen — and wrote an unforgettable melody set to near prophetic words.

“And the dreams that you dare to dream / Really do come true.”

They call me "NewsHound IV," because I'm a clever Finnegan, sniffing out stories all over the Boulder area. I love Jewish holidays because the food is GREAT, especially the brisket. Well all the food. I was a rescue pup and glad to be on the scent!
Previous The Things We Carried – Parshat Beshalach
Next Succulants and Smoothies for Tu B’shvat

Pride is Coming to Boulder… Save the Date