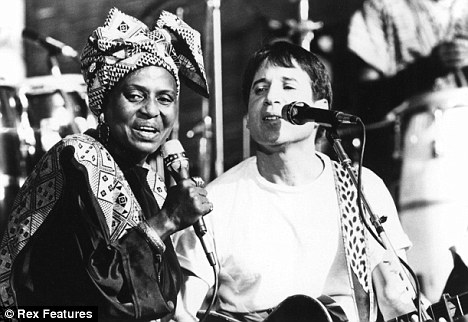 In anticipation of our May 17th Paul Simon tribute concert, I recently watched a documentary about the making of Graceland.

“Under African Skies” (available for $3.99 on Amazon) was made 10 years ago on the occasion of the Graceland reunion tour that reunited Simon with the musicians from the historic tour that had taken place 25 years earlier – and revolutionized pop music. Graceland – the 1986 runaway smash album and the subsequent world tour – also caused a cultural political furor at the time. In the documentary, Paul Simon explains the genesis of Graceland – and why an album celebrating South African music has a title that refers to Elvis Presley and Memphis. It seems  that in the mid-80s, Simon had gotten his hands on a cassette tape recording of South African music that was all he wanted to listen to for a time. Obsessed with the sound, he called his record company and asked if they knew anyone in South Africa. Next thing he knows, Simon is invited to South Africa to sample and record the rich music being created there by black musicians under apartheid.

Simon happily accepted the invitation and spent two solid weeks in a Johannesburg studio recording songs by numerous African bands. He also met with huge opposition from anti-apartheid activists because he was breaking the cultural boycott that was imposed on the apartheid regime. Simon describes the time as incredibly tense and volatile.  When it came time to collaborate with Ladysmith Black Mambazo, he did not want to return to South Africa, and had them join him at Abbey Road. Upon his return to the United States, Simon and his team went into the studio to sift through all the African music they had recorded. They tweaked it, played with it, and turned the jam sessions into pop songs. Simon then composed lyrics and melodies that were superimposed on top of these South African music pieces.  Because his last album had not done well, Simon said he felt free to experiment since no one was expecting too much from him. He was left alone to indulge in this pet project after decades of fame. It was to reignite his career and establish him as a musical maverick.

In the case of the title song, Simon explains on camera that the phrase “going to Graceland” was stuck in his head and he assumed it would go away because it didn’t fit the geography of his album. But it didn’t go away and he decided he needed to make a trip to Graceland – the result of which is the song that did grace the cover of his African beat-driven classic. Graceland, a place in the American South, certainly suggests a reference to race and South Africa. But according to Simon, it was really just an artistic anomaly.

The success of the Graceland album was astounding. It all started on “Saturday Night Live,” where Simon had been scheduled to perform with his  South African backup singers to coincide with the album’s release. The record company decided to delay the album’s release until the fall, but the spring “Saturday Night Live” booking went on anyway. So the notoriously tough SNL audience was going to be hearing music for the very first time, Simon remembers his nervousness.  However, the crowd went crazy for Paul Simon and Ladysmith Black Mambazo, tipping Simon off to the reception his “little experimental album” was about to get.

Despite the critical and popular acclaim of Graceland, Simon continued to be subjected to vicious criticism for breaking the boycott. His own colleagues and collaborators, however, always felt that he ultimately he would do much greater good by bringing South African music, and hence the South African cause,  to a wider public. That is indeed exactly what happened, exonerating Simon for his instinctive decision to bring this music and these musicians to public attention. In the end, Simon was invited back  to South Africa by Nelson Mandela after he was freed a few years later, because the  famed leader fully recognized the role that Simon had played in helping end apartheid.

Simon has plenty to be proud of. Ladysmith Black Mambazo started to play concerts around the world, and pop music fans everywhere were suddenly hip to the joyful music made under African skies.

Kathryn has spent her professional life writing about, teaching, and presenting the arts. Founding Director of the Boulder Jewish Film Festival, Kathryn was Director of Menorah and ACE at the Boulder JCC from 2003 through August, 2019. The former film and theater critic for the Boulder Daily Camera, Kathryn is the author of "The Fifty Greatest Jewish Movies" and "The Fifty Funniest Films of All Time." kathryn.bernheimer@gmail.com
Previous Is Your Teen Daughter Uninterested in Summer Camp?
Next Baruch Dayan Ha’emet: Eunie Kauvar, z”l