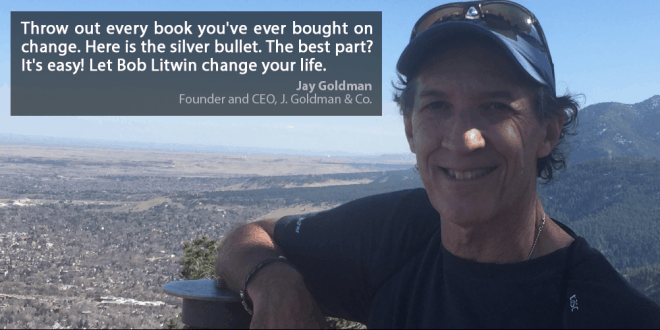 Kathryn Bernheimer June 5, 2018 Arts & Culture Comments Off on Late-Life Tennis Champ and Performance Coach Can Help You Improve Your “Game”

When Bob Litwin won the world championship for his age division in tennis in Australia, he spent a few days elated at being the number one player in the world.

After two days on top of the world, he says he began to realize something was nagging at him.

Litwin has combined his own experiences as an elite athlete who came to competitive tennis late in the game with his work as a performance coach to write “Live the Best Story of Your Life.” Litwin will discuss his book on Sunday at the Boulder JCC’s Local Authors/Local Stories celebration, and share his thoughts on how anyone can improve their “game,” whatever that might be.

“I love having a platform to help people learn about improving,” he says. “Performance coaching is really about helping people get out of the swamp. We all have different reasons for wanting to improve. It can mean money or self-esteem.  Here in Boulder, there seems to be more people looking to excel in less materialistic ways than in New York. But in the end, who’s to judge, as long as people are doing better in their lives? There are different reasons that take us to the top of the mountain.” Litwin does not simply dispense advice tempered by experience. He has created a process in which each client is required to write their story, which usually includes a lot of negative emotion, excuses for failure and patterns of behavior that seem fixed. Then Bob coaches them to write the story of who they want to be, how they see their life looking and feeling once they have become their most successful self. Then it’s one step in front of the other to make the change to a new, improved story.

“I really think you need to write it down,” Bob adds. “It’s critical to see it in a more detached way. You know, we are all really good at diagnosing other people,” he laughs, adding that “the observed self” is much trickier.

Many of the people Bob works with are already extraordinary people – hedge fund managers and track stars – “who are looking to squeeze out an extra 2%. These are people who are really excellent, and don’t hesitate to do the work. They recognize ‘resistance’ as something to be broken through.” But Bob also realized that many people who need help can’t afford a performance coach. His book, he hopes, will allow readers to coach themselves as they write a more positive story that instigates needed change.

In his book, Bob dispels the commonly held idea that “change is hard.” In fact, we are constantly changing, highly adaptive creatures capable of huge improvements in our lives, he argues. Some people, himself included, thrive on change, and crave the excitement and opportunity that change brings.

Bob went through a few traumatic years, which he recounts in his book. His wife of many years died of cancer, and he suffered a hip fracture that he was told would end his tennis ambitions.  Now remarried and competing at the top of the 70-year-old division, he says he has to model what he teaches his clients.

“I have to do the work myself. When my wife was dying, it wasn’t a happy time. But I faced it with the attitude that good and bad are the same thing. You have to welcome ‘what is.’ I had to say, this is what is in my life right now, and I have an opportunity to find out who I can be.”

Kathryn has spent her professional life writing about, teaching, and presenting the arts. Founding Director of the Boulder Jewish Film Festival, Kathryn was Director of Menorah and ACE at the Boulder JCC from 2003 through August, 2019. The former film and theater critic for the Boulder Daily Camera, Kathryn is the author of "The Fifty Greatest Jewish Movies" and "The Fifty Funniest Films of All Time." kathryn.bernheimer@gmail.com
Previous You’re Invited! Musical Kabbalat Shabbat at Bonai Shalom
Next 2018 Boulder Jewish Festival Shakes Things Up