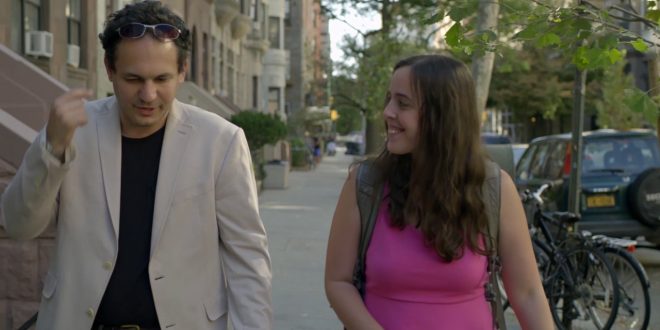 “Keep the Change” Offers a Message of Inclusion and Acceptance

Kathryn Bernheimer January 29, 2018 Arts & Culture Comments Off on “Keep the Change” Offers a Message of Inclusion and Acceptance

The literary arts in particular are rich with stories that teach through positive role modeling – any plot with a hero, for starters. Cautionary tales, on the other hand, depict a negative experience to suggest what might be avoided and how.

“Keep the Change,” the first feature film in which autistic characters are played by actors on the autism spectrum, falls squarely in the positive affirmation camp. It’s even a bit of a fairy tale, as most romantic comedies are. For example, our equally warm-hearted closing night film, “The Wedding Plan,” is a fairy tale/romantic comedy featuring quite an unusual Orthodox Cinderella.

But why shouldn’t a romance between two people who happen to be on the autism spectrum be any different than that of any other couple learning self-acceptance?

In her acclaimed debut, director Rachel Israel made a powerful choice to treat her characters like any others in the genre. She made some other very deliberate decisions when she began this ambitious project.

She knew she wanted to tell the story through a neuro-atypical point of view, unlike the excellent, eye-opening “Rain Man,” told from the perspective of the title character’s brother.

And she knew that authenticity required a collaboration with someone who actually understood the experience of autism from the inside. She had already met that partner, Brandon Polanksy, in a college art class, and they had become friends. Fascinated by stories of his tense family dynamics and problems with women, Israel began to shape a story around his anecdotes. (Similarly, “Menashe,” which screens on Sunday, March 18, was crafted around the experiences of its beleugured Orthodox star.)

Israel then discovered Samatha Elisofon, an actress with experience performing in a multi-abled musical theater troupe, who radiated charisma on the screen. She cast Elisofon to co-star as Brandon’s out-going object of affection in a 14-minute short about the funny, tender romantic encounter between two people attending an autism support program at the Manhattan J. The success of the short on the festival circuit led to the full-length feature. “Keep the Change” swept the awards at the Tribeca Film Festival in April, 2017.

Selected as the opening night of the Boulder Jewish Film Festival on March 8 at the Boulder JCC, the indie hit spreads a powerful message of inclusion, which aligns with the values of the J. The film is about acceptance, and shows us a world in which acceptance is clearly practiced.

In addition to being a delightful film that has wide appeal, “Keep the Change” also afforded ACE the opportunity to create an event around the film that showcases the incredible resources in Boulder County.

More than a dozen local agencies offering services to people in the community living with disabilities of all kinds will be featured as our special guests. Prior to the 7 pm screening, a reception and resource fair will take place in the JCC Lobby.

The Community Inclusion Resource Showcase will include leaders from these organizations, as well as members of the constituency they serve. Audience members will have a chance during the wine and cheese reception to stop at each organization’s table, pick up information and chat with the organization’s representatives.

Following the 7:00 pm screening, director Rachel Israel will be interviewed via Skype. Among the topics for discussion will surely be her decision to create a new model of autism with an honest, upbeat story that honors the special nature of its fully human characters.

Humor serves several functions in Israel’s remarkable debut. Brandon tells jokes, like any guy with a sense of humor trying to engage in comic banter. But because his filters are a little off, the inappropriateness of the jokes is what is actually funny.

Humor is a humanizing force, and is used in multi-layered way to reinforce an attitude of openness in “Keep the Change” – as it is in “West Bank Story” and “The 90 Minute War” (both screening Monday, March 12).

“Keep the Change” does not treat its subject lightly, however, acknowledging the challenges faced by its fully formed characters. But its greatest virtue is its inspiring representation of acceptance. Look for two scenes in particular – one in a fancy restaurant and the other a meeting with Brandon’s famous cousin – which reveal what acceptance might look like. Change often starts with artists portraying a more positive future. The film’s message of inclusion is one we stand ready to embrace.

Kathryn has spent her professional life writing about, teaching, and presenting the arts. Founding Director of the Boulder Jewish Film Festival, Kathryn was Director of Menorah and ACE at the Boulder JCC from 2003 through August, 2019. The former film and theater critic for the Boulder Daily Camera, Kathryn is the author of "The Fifty Greatest Jewish Movies" and "The Fifty Funniest Films of All Time." kathryn.bernheimer@gmail.com
Previous Annual Jewish ECE Conference Held in Boulder for First Time
Next #Jewish Lives Matter