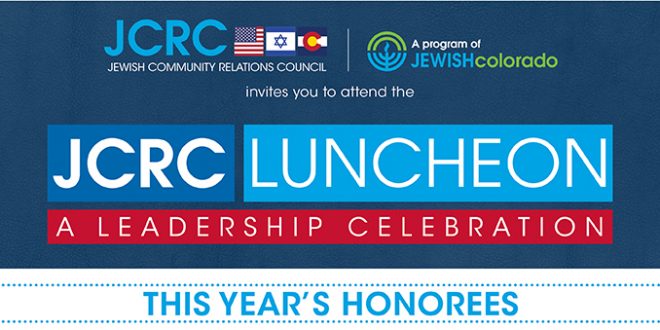 JCRC Announces 2018 Honorees to be Celebrated at Annual Luncheon

Joseph Dubroff March 8, 2018 News Comments Off on JCRC Announces 2018 Honorees to be Celebrated at Annual Luncheon

The Jewish Community Relations Council (JCRC), a program of JEWISHcolorado, is pleased to announce its 2018 Leadership Awards to be presented at its annual luncheon on March 22.

This year, the JCRC will honor Rick Kornfeld with its Community Leadership Award and Senate President Kevin Grantham with its Legislative Appreciation Award.

Rick is a past chair of the JCRC and has twice co-chaired its Public Officials Mission to Israel.  He has provided invaluable support to advance JCRC’s work. Rick Kornfeld is a fourth-generation Coloradan and seasoned litigator. He is active in the Denver legal, nonprofit and Jewish communities.

During Rick’s tenure as JCRC Chair, JCRC supported state legislation for civil rights enforcement, civil unions, and in-state tuition for undocumented students.  JCRC also worked in partnership with other organizations to educate the University of Colorado Board of Regents so they would reject a proposal to divest from Israel.

The JCRC Legislative Appreciation Award is given to current or former members of the Colorado State General Assembly or the U.S. Congress. Through legislative work, the nominees must demonstrate leadership on issues of importance to the Jewish community. Senate President Grantham has been a strong supporter of Israel and the Jewish community since he entered the Colorado Senate. He participated in the JCRC Public Officials Mission in 2011. In 2016, Senator Grantham supported legislation prohibiting economic boycotts of Israel, making Colorado the 4th state in the country to pass such a policy. Last June, when the Israel Consulate asked Colorado to participate in an international recognition of the 50th anniversary of the Reunification of Jerusalem, he took the lead and put together a bi-partisan tribute and ceremony.  He also led a beautiful tribute in the Senate in memory of the Honorable Shmulik Rifman z”l, the long serving mayor of Colorado’s partnership region in Israel, Ramat HaNegev.

Joseph Dubroff is the Director for External Affairs for JEWISHcolorado. JEWISHcolorado provides a pathway for Coloradans to connect with their Jewish identity and values. We offer diverse, creative and inviting opportunities to embrace all Jews at every age and stage in life. Since 1946, JEWISHcolorado has offered programs and services to unite with the people of Israel and ensure a thriving and lasting Jewish community in Colorado. For more information, visit www.JEWISHcolorado.org.
Previous The Shape Of Our Inner Monsters
Next Community-Wide Yom HaShoah Service at Bonai Shalom