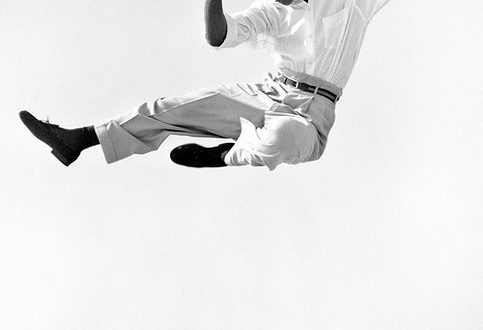 This year’s trailer, produced by Jason Phelps, is set to music by Yuval Ron, who appears in person at the festival. Ron will present the cult classic film he scored, “West Bank Story,” and perform some of his compositions, at our Centerpiece event, Sunday, March 12 at 6:30.

Phelps, who has produced every festival trailer to date, employs Ron’s Middle Eastern music to great effect, making the festival look like a dance-athon! In truth, there is some fine dancing on display in this year’s unusually lively line-up. “West Bank Story,” is a high-kicking satire of “West Side Story,” with rival falafel stand owners as the Sharks and Jets. Gloriously silly, the peace parable boasts hilarious choreography. It may even whet your appetite for ACE’s upcoming Bernstein at 100 concert and the Boulder Phil’s performance of the masterwork. Hoofing was elevated to a fine art by Sammy Davis Jr., dazzlingly profiled in “I Gotta Be Me.“ The new bio pic pays tribute to the legendary showman who could do it all, and did it all with defiant flair. A star-studded roster of interviewees (including Jerry Lewis, Whoopi Goldberg and Billy Crystal) pay tribute to the multi-talented song-and-dance man.

There’s some lovely Indian dancing in “Shalom Bollywood,” which strangely seems to fit the Middle Eastern score perfectly. This all singing, all dancing history of the world’s largest film industry reveals the unlikely story of the 2000 year old Indian Jewish community and its formative place in shaping the world’s largest film industry. When Indian cinema began 100 years ago it was taboo for Hindu and Islamic women to perform on screen, so Indian Jewish women, who were more liberal and progressive, took on female lead roles, which they then dominated for decades. However, because of their stage names people thought they were Muslims or Christians. Until now…., MGM’s Ziegfeld Girl Hedy Lamarr was not only the most beautiful woman in Hollywood—the icon whose look inspired Disney’s Snow White, Bob Kane’s Catwoman, and blonde star Joan Bennett’s brunette makeover, the subject of the adolescent Andy Warhol’s earliest recorded drawing—but quite possibly the smartest person in the movie industry of any gender. Her famous “African” dance was considered almost obscenely sexy – fittingly enough for the star of “Samson and Delilah.” “Bombshell“ details the star’s double life. The dance of life takes many forms at the festival, which is full of illuminating and inspiring stories. Dance on over to the Dairy and join us! BUY TICKETS HERE

Kathryn has spent her professional life writing about, teaching, and presenting the arts. Founding Director of the Boulder Jewish Film Festival, Kathryn was Director of Menorah and ACE at the Boulder JCC from 2003 through August, 2019. The former film and theater critic for the Boulder Daily Camera, Kathryn is the author of "The Fifty Greatest Jewish Movies" and "The Fifty Funniest Films of All Time." kathryn.bernheimer@gmail.com
Previous Holly Auerbach Bat Mitzvah
Next Reflections 2018 Raises the Bar Again — Over $240,000 for BJCC