From a front row seat at the Boulder JCC Levin Hall, I twice attended the remarkable play, ‘Oh My G-d.’ Both times I simply said ‘wow!’

However, this play was far from simple. Written by a secular Israeli woman who has since passed away, OMG is deeply nuanced and splendidly acted. With only three characters-the plot is also deceptively simple.  G-d, superbly played by Boulder’s own Rabbi Marc Soloway (who used to be an actor in his past, and now present life), goes to visit a woman therapist who has a son with severe autism. This play may perplex and offend some people. Many of the lines are drawn directly from the Tanach, the Hebrew bible, but may seem to be used in an offensive and sacrilegious manner.

I would like to defend these charges of heresy, by looking beneath the surface of some openly irreverent aspects of this play. My reason for doing so goes beyond the artistic quality of the play. I would like to speak to the very heart of the divide between religious and non-religious attitudes, particularly in Israel. My hope is that the play’s popularity can lead to ways to bridge what seems an insurmountable gap. I will do so by drawing upon some rabbinical, mystical and Hassidic sources which have explored these issues for centuries.

The beginning of the play has many humorous touches which give a little cushioning for the intensity coming after. Some of the humor is wistful and some biting.  One example is when the therapist asks about G-d’s mother, and he replies, ‘No Mother,’ and she retorts, ‘Ah, so there’s no one you can blame.’ Does humor fit in to traditional Jewish outlooks? Most definitely. The Talmud relates a story of two men who would stand in the market place just making people happy.  For this gesture alone they were rewarded with a place in the World to Come. The Jewish code of laws actually ends with the quote: ‘One of good heart parties regularly!’ Joy should be the default button in Jewish observance. Even prophecy could not rest on one who is not joyful. Where does this joy come from, especially in difficult times? From the knowledge that we have the ability to bring pleasure to G-d.

Pleasure to G-d? Is not G-d beyond change and human emotions? Of course, the essence of G-d cannot be subject to change or feelings. However, addressing seeming anthropomorphic descriptions in the Torah, the Talmud insists ‘The Torah speaks in the language of humanity.’ Even G-d’s attributes and names are ways of relating to his creatures.

Yes, monotheism is a basic tenant of Judaism. However, though the essence of G-d is unknowable, there is in the mystical writings, a masculine and feminine face or role that G-d plays. One is called the Holy Blessed One, a more masculine archetype, and the other is called the Shechina, the more feminine dimension. In an ideal world, the two are ‘wedded’ to each other. But then there is exile, personal, collective, and even cosmic. One definition of exile is when these two faces are distant or separated from each other. The task of humanity is to unite and bring harmony to these two. Every polarity in the world can be considered an aspect of this division. Furthermore, Hassidic writings that foretell the trajectory of history, explain that as the masculine face takes a back seat, the feminine takes on a more active role.

Again, those who went to the play could see reflections of this kind of role reversal. When the therapist realized that in her moment of darkest despair, the one she instinctively turned to was G-d; no one else was there for her! In the play, G-d and the therapist sometimes change seats and roles. This to me is a clear model of the above mentioned need to heal the rift between the masculine and the feminine aspects of the divine. Neither can be whole or holy without the other.

An extended implication of this process is the Shechina’s investment in what Kabbalists may call the ‘lower worlds’ and secularists may refer to as more concern for our physical lives and planet. In Israel in particular, where the play was written, the struggle and often confrontation between religious and secular Israelis can be frequent and contentious. My understanding of Hassidic philosophy, as expressed by several active Hassidic streams, teach the Baal Shem Tov’s approach to life, that G-d is in everything, and everything contains a spark and reflection of divinity. Whether reflecting on the inanimate world, or on humans who seem to be dysfunctional, there is a deep respect and reverence for life in mystical teachings. From this perspective, the role of the autistic child in OMG is very meaningful. The non-human or nonverbal world is still an offspring of the union between the spiritual and material. In fact, the way the late Lubavitcher Rebbe explained it, an autistic child has a closer relationship with G-d by not being so bogged down by interpersonal drama. One who can relate wholeheartedly to such a child, or adult with unconditional love, can truly be said to emulate G-d’s ways.

In ordinary human interactions too, when the connection is genuine and heartfelt, the divine Presence comes to rest. Even less traditional Jewish philosophers like Buber and Levinas sense a significant encounter between two people to reflect a manifestation of something beyond, even something divine. Also, the way we interact with each other reflects the way G-d interacts with our world. What superficially seems to be random in life is really expressing hidden lines of connection.

Thus, like a repeated phrase in the play, there are no coincidences. The evening and afternoon I saw the play, ‘happened’ to be the yahrzeit of the rebbe of Piaseczno, Rabbi Kalonymus Kalmish Shapira, one of the last rabbis of the Warsaw ghetto, who ‘happened’ to pass away in 1944 on my secular first birthday.

I spent the previous Shabbat reading and thinking a lot about his writings, in particular the idea of ‘What was G-d feeling during the Holocaust.’ So if a play comes along on his yahrzeit and has scenes like G-d crying, feeling angry, powerless, etc. my mind easily went to this Rebbe’s teachings. He was critical of attempts to explain the Holocaust either by justifying the divine will or rising above the pain by feeling it won’t last forever. Both viewpoints were dismissed by the Rebbe. His radical take was that our primary response needs to be that we too cry with G-d in his secret space. Through that commiseration, we can console not only ourselves, but also, as it were, G-d. Those who were at the play will recall lines that echo this Rebbe’s perspective. Here are some of the Rebbe’s actual words:

“It is possible that at a time of Hester Panim (concealment of the Divine Face) which is to say when G-d hides within his inner chambers, a Jew may also enter and be alone with G-d there….The Master of the universe does not ignore the suffering of the Jewish people. He weeps together with us. The faith and continued sense of G-d’s closeness- means that G-d is with us literally. Hence our weeping is not something external to G-d, rather He joins in it…This joint weeping creates a renewed intimacy with G-d-the sort of intimacy that sometimes develops between people who reveal their shared suffering to each other”. This quote reflects so much of what is in this ostensibly ‘secular’ play!

In short, the only way I, as a Torah observant Jewess,  could relate to a secular play about G-d is to use a Torah lens to find the divine in the human and secular, and to see the humanity in the divine. This I think is what the play was all about. Perhaps it is even the way to bridge the perhaps illusory divide between such artificially split terms as religious and secular in the first place.

Actually, come to think of it, even the human-divine division is not so absolute. Maybe in the deepest sense, that is what this amazing play, Oh My G-d is all about.

I have been teaching Torah and Chassidic writings for over forty years to students of all ages and backgrounds, both on the East Coast and the Midwest. I have been a director of several Jewish organizations in Santa Fe and Colorado. My articles and poetry on a wide variety of Jewish topics have been printed in many publications, and also are available online.
Previous As The Holidays Approach, “The Fierce Urgency Of Now”
Next November First Friday at Bonai Shalom: Geneology and Holocaust Survivors 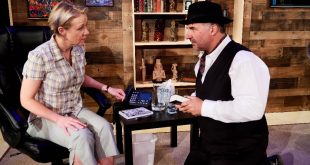