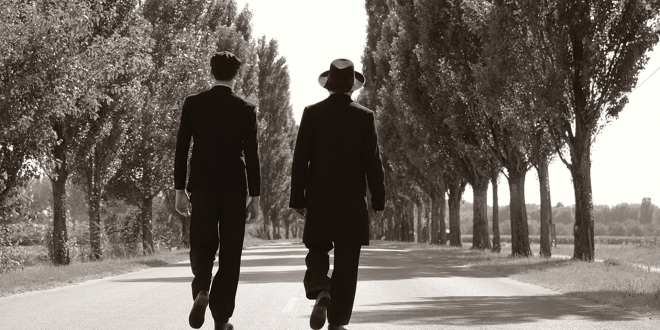 Wearing the mantle of acclaim that adorned “Son of Saul,” this year’s Hungarian must-see Holocaust film is much less graphic, yet equally devastating. Now playing at dozens of theaters around the country, “1945” has been getting equally enthusiastic press, including being named one of the ten best films of the year by J. Hoberman of the Village Voice, among others. Not one of the best Jewish films, mind you. One of the best films, period.

It’s a good bet that the director had High Noon in mind when he made this film, but the comparison ends there. As a compact study of wartime guilt, the film has the look and feel of a waking nightmare. – Christian Science Monitor

A Holocaust film built, consciously or not, on a reversal of the tropes of the western, down to ticking clocks that might as well be nearing high noon. – NY Times

A fresh, intelligent cinematic approach to a difficult topic that takes on a transitional time in Hungarian history with subtlety and nuance. – Variety Mesmerizing, quietly moving, and enthralling. It’s one of the best films of the year. – NYC Movie Guru

Simple, powerful, made with conviction and skill, “1945” proceeds as inexorably as Samuel and his son on their long walk into town. It’s a potent messenger about a time that is gone but whose issues and difficulties are not even close to being past. – LA Times

“1945” is a real masterpiece, heightened by the end of the film when we, the audience and the villagers, understand the real mission of these two Orthodox Jews. It’s a rare moment where one of Judaism’s most important contributions to the world, that of guilt and remorse over moral wrong doings and the sanctity of life, are presented in such a heart wrenching way on film. – Abe Foxman Based on the acclaimed short story “Homecoming” by Gábor T. Szántó

On a summer day in 1945, an Orthodox man and his grown son return to a village in Hungary while the villagers prepare for the wedding of the town clerk’s son. The townspeople – suspicious, remorseful, fearful, and cunning – expect the worst and behave accordingly. The town clerk fears the men may be heirs of the village’s deported Jews and expects them to demand their illegally acquired property back.

Kathryn has spent her professional life writing about, teaching, and presenting the arts. Founding Director of the Boulder Jewish Film Festival, Kathryn was Director of Menorah and ACE at the Boulder JCC from 2003 through August, 2019. The former film and theater critic for the Boulder Daily Camera, Kathryn is the author of "The Fifty Greatest Jewish Movies" and "The Fifty Funniest Films of All Time." kathryn.bernheimer@gmail.com
Previous Community Second Seder at Har HaShem
Next When the Nazis Hosted the Olympics

Scientists have long been puzzled by the frequent disappearance of ships in the Bermuda Triangle. In his new Holocaust documentary, filmmaker Ken Burns has managed to make the entire Bermuda Conference on Refugees vanish.