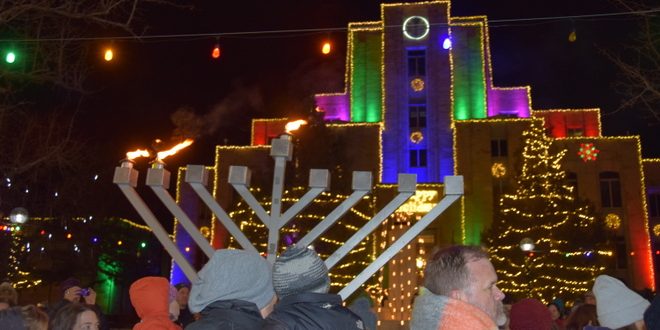 Chanukah in Our Times

Rabbi Pesach Scheiner December 6, 2018 Jewish Life Comments Off on Chanukah in Our Times

We are all familiar with the story of Chanukah in the year 167 BCE, a Greek Macedonian kingdom centered in what is today Syria had tried to outlaw the Jewish religion in Israel and replace it with Hellenistic culture.

Hellenism was very popular at that time. It was sophisticated and intellectually satisfying. It offered wealth, beauty, art and glamor. Judaism, on the other hand, appeared to some as old, small and outdated.

However, the Jews knew that the laws and rituals of Judaism nourish faith, trust, love and strength, the most important components of life.

So the miraculous happened, a small group of Jews called the Maccabees went to defeat an empire.

In our times, we are very much faced with the same struggle the Jews had in the time of Chanukah. Our society has many similarities to Greek Culture and many people worship art, technology and science.

In truth, Judaism is not against the beauty of the Greek culture.  The Talmud states that the beauty of the Greek language was intended for the Jewish people. However, there is a crucial difference.  In Greek Culture, man is the center of the universe.  “Man” said an ancient Greek philosopher, “is the measure of all things”. Judaism disagrees, the Bible says; “The Fear of G-d, is the beginning of wisdom.” In Judaism, the beauty of the world, is a means to a higher goal of uplifting and sanctifying the world.

May we all be blessed with a joyous and uplifting Chanukah! May we merit the building of the third Temple and the kindling of the Menorah in it speedily in our days.

Rabbi Pesach Scheiner is the Rabbi of Boulder County Center for Judaism. In addition, he teaches extensively throughout Boulder County and is the author of "Finding the Joy in Everyday Living," a book of short chapters explaining the ways to access happiness through appreciation, gratitude, and a sense of purpose.
Previous Watch But Don’t Look
Next Ignite Chanukah 9 Shines