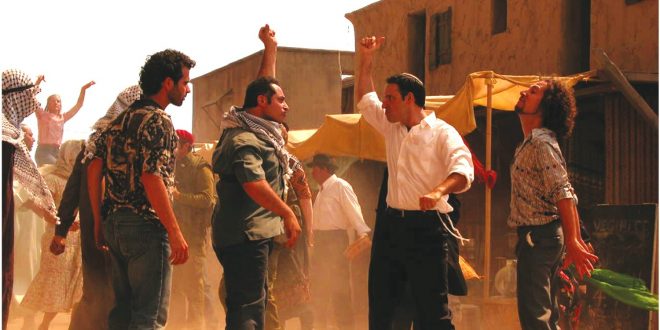 After winning the Oscar in 2007 for best short feature, “West Bank Story” went on to enjoy long life as a kind of cult classic. Based on “West Side Story,” the comedy about rival Israeli and Palestinian falafel stands delighted audiences with its cheeky charm.

The Boulder Jewish Film Festival takes a closer look at the surprise hit with a Centerpiece program, that might better be called Centerpeace, on Monday, March 12, 6:30 pm in the Gordon Gamm Theater.

Composer of the film’s score, Yuval Ron will share the story of how this audacious little musical farce struck a chord with audiences around the world. Following the screening, Ron will discuss composing for film, and play some of his new compositions. Tickets ($18): CLICK HERE

Ron will also be at the Boulder JCC for a special presentation, “Music as Medicine in the Ancient East,” at 2:00 pm, Tuesday, March 6. CLICK HERE TO REGISTER This lecture-demonstration on how sound was used as medicine in biblical times by the Hebrews – and earlier in India as well as in the Ottoman Turkish empire – is based on Yuval Ron’s recent collaboration with neuro-scientists Andrew Goodman and Mark Robert Goodman (authors of How God Changes Your Brain).

An analysis of the musical modes of the Mid East and some mention of the Indian ragas as powerful tools of the healers of the past. A live music demonstration how these modes modulate our feelings, emotions, and sense of light and darkness. This talk includes references to some of the latest research in Music Therapy and Neuro-science. A musical comedy set in the fast-paced, fast-food world of competing falafel stands on the West Bank. David, an Israeli soldier, falls in love with Fatima, a beautiful Palestinian cashier, despite the animosity between their families’ dueling restaurants. Can the couple’s love withstand a 58-year-old conflict and their families’ desire to control the future of the chick pea in the Middle East?

In accepting the Oscar for best live action short, American director Ari Sandel said: “I made a comedy, a musical about Israelis and Palestinians that takes place between two falafel stands in the West Bank. It’s a movie about peace and hope. To get this award goes to show that there are so many people who support that notion.”

Kathryn has spent her professional life writing about, teaching, and presenting the arts. Founding Director of the Boulder Jewish Film Festival, Kathryn was Director of Menorah and ACE at the Boulder JCC from 2003 through August, 2019. The former film and theater critic for the Boulder Daily Camera, Kathryn is the author of "The Fifty Greatest Jewish Movies" and "The Fifty Funniest Films of All Time." kathryn.bernheimer@gmail.com
Previous Israeli Botanical Company Releases Skin Remedies in US
Next Community Invited to Chevra Kadisha’s Annual Meeting