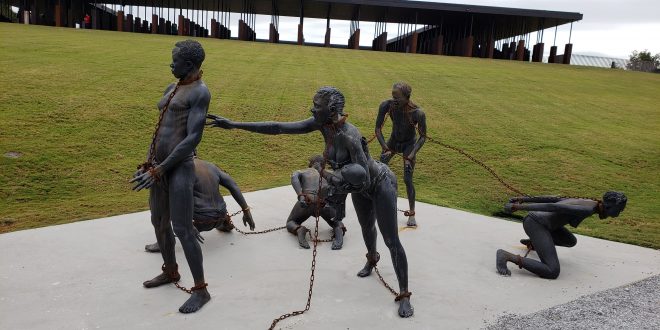 National Memorial for Peace and Justice

Last week I found myself eating lunch next to two black police officers at an Indian restaurant in downtown Birmingham, Alabama, a scene that would have been impossible just fifty years earlier in this state when the local police force included no people of color and was part of the horrible, systemic violence perpetrated against blacks.  [The first black policeman in Birmingham was Leroy Stover in 1966; it was years before he was accepted by his peers and he was treated horribly at the beginning.] It was odd to reflect on this as I sat there processing my first journey to the south and its legacy of slavery, segregation and incarceration.

I was in Birmingham following a mission to Montgomery with 35 rabbis and other Jewish leaders, on a trip organized by T’ruah: The Rabbinic Call for Human Rights, to visit the incredible Legacy Museum and the National Memorial for Peace and Justice.

There, we explored the evolution of what the Equal Justice Initiative, which created the new museum and memorial, calls racial terrorism and its changing manifestations from slavery to Jim Crow, to lynching to mass incarceration. The memorial is dedicated to over 4,000 African-Americans, who were lynched, often publicly, throughout the South and beyond between 1880 and 1940.  Almost always these brutal murders were the consequence of false or very spurious accusations, very often real or fabricated actions that were seen to violate the laws of segregation. The Legacy Museum: From Enslavement to Mass Incarceration is located on the site of one of many slave warehouses in downtown Montgomery.  A block from one of the most prominent slave auction spaces in America, now a beautiful plaza with a fountain, the Legacy Museum is steps away from an Alabama dock and rail station where tens of thousands of black people were trafficked during the 19th century. Across from this square is the bus stop where Rosa Parks boarded the bus and refused to give up her seat to a white person, beginning the bus boycott in 1955. In an incredibly compelling way, this museum traces the evolving history of prejudice based on repulsive racial theory of white superiority. It is not possible fully to describe the power and impact of the museum and memorial, but so many who have visited them since they opened six months ago agree that they are of tremendous national significance and tell a narrative that needs to be told.  The ways in which systemic racial injustice still exists in our society cries out to us that these sites are not just about the past but the present and, tragically for now, the future too.

Some have called the museum and memorial the American equivalent of Yad VaShem, Israel’s Holocaust museum and memorial.  I, like many Jews, have been to some of our sites of destruction,, and I will be visiting Auschwitz and Treblinka for the first time in a few weeks.  I have also been to the Slave Castle in Cape Coast in Ghana, where, for so many Africans, the awful journey into slavery began. What does it mean to visit such sites where the Divine in humanity has been so defaced by unbearable cruelty?  As a Jew, how is visiting sites of Jewish destruction different from visiting the sites of others’ tragedies? These are not easy questions to answer, but are essential to ask.

Bryan Stevenson, the public interest lawyer and author of Just Mercy, founded EJI in 1989 with a commitment to change the narrative on race in America.

He says that the truth telling is essential “to liberate us all.” We cannot deny or ignore this brutal history and its continuing impact. Rabbi Abraham Joshua Heschel charged us with the words that “indifference to evil is worse than evil itself, that in a free society, some are guilty, but all are responsible.”  There is a collective shame that needs to be felt, but a shame that inspires collective responsibility to work for justice.

So much of the brilliant exhibit and frankly this whole journey to the South moved me.  Some of the images will not leave me, like the holographic image of the woman slave soulfully singing “this may be the last time you will hear me singing Lord. I don’t know.” In a cage next to her, two young children cry out “has anyone seen our mama?”  How could this not evoke some of the appalling and continuing impact of families torn apart still by innocent black men being shot, falsely accused, living on death row; or by the deliberate policy of separating refugee families at the border, which is still far from resolved.

On the drive from Montgomery to Birmingham, I was shocked to see a massive Confederate flag blowing in the wind above a memorial to the “Sons of the Confederacy.” With all that has transpired in this country, I really shouldn’t have been so surprised and, of course, the losses on both sides of the Civil War were enormous and painful. But, as someone in our group pointed out, even if we did not plant the trees, it does not mean that we do not enjoy its shade. So much white wealth and white power was built literally on the backs of black slaves and those of us who are not black have to confront the reality of that and our continuing complicity.

In Birmingham, I had the opportunity to continue my civil rights tour of the south and spend some time in the 16th Street Baptist Church, the site of the 1963 bombing that killed four black girls.

The church is across from Kelly Ingram Park and the Birmingham Civil Rights Institute, both of which are full of moving memorials and more details of the this extraordinary and painful history.  I also experienced wonderful southern hospitality as a Shabbat guest at Temple Beth El, the historic Conservative shul in which 54 sticks of dynamite were planted by a white supremacist  group in 1958.  The fuse went out about a minute before it would have destroyed the whole building.

I am so grateful for the prophetic voices in T’ruah under the inspirational leadership of Rabbi Jill Jacobs.  Those voices invite all of us to join them in crying out for justice. Jewish tradition and our own history demand that we not be silent and indifferent in the face of injustice. Two black police officers enjoying an Indian buffet lunch in Alabama may point to just how much has changed, but there is still a long way to go.

Marc is a native of London, England where he was an actor and practitioner of complimentary medicine before training as a rabbi in London, Jerusalem and Los Angeles. He was ordained at the Ziegler School of Rabbinical Studies at the American Jewish University in 2004 and has been the the spiritual leader at Bonai Shalom in Boulder ever since. Marc was a close student of Rabbi Zalman Schechter Shalomi and received an additional smicha (rabbinic ordination) from him in 2014, just two months before he died. He has been the host and narrator of two documentary films shown on PBS; A Fire in the Forest: In Search of the Baal Shem Tov and Treasure under the Bridge: Pilgrimage to the Hasidic Masters of Ukraine. Marc is a graduate of the Institute of Jewish Spirituality, a fellow of Rabbis Without Borders, has traveled to Ghana in a rabbinic delegation with American Jewish World Service and co-chair of the Rabbinical Council and national board member of Hazon, which strives to create more sustainable Jewish communities. In 2015, Marc was among a group of 12 faith leaders honored at The White House as “Champions of Change” for work on the climate. Marc is a proud member of Beit Izim, Boulder’s Jewish goat milking co-op.
Previous November First Friday at Bonai Shalom: Geneology and Holocaust Survivors
Next Letters: From Then to Now. And Where Next?

Religion and Human Rights After the 2016 Election 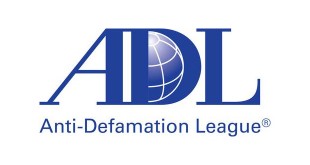