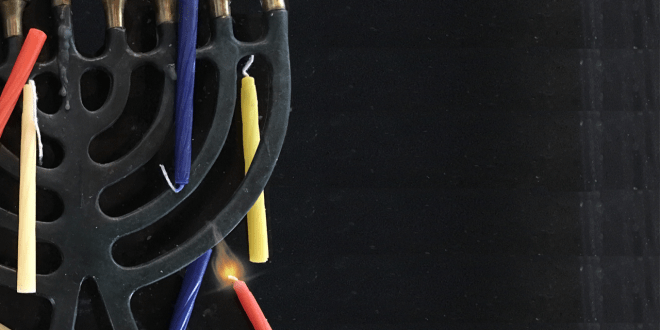 Eight Nights is the story of a nineteen-year-old German-Jewish refugee who tried to escape Nazi Germany on the SS St. Louis, was sent back to Europe, then survived a concentration camp, to reunite with her father after 10 years. The play takes place over eight nights of Chanukah, over eight decades of her life.  It explores the refugee experience, as well as the trauma mirrored in the experiences of the African-American community, the interned Japanese citizens and the current Syrian crisis, and ends just before Trump takes office and institutes his Muslim ban.
In response to the recent massacre in Pittsburgh at The Tree of Life synagogue, Curious Theatre is producing 8 Nights of Eight Nights: a national series of readings as a fundraiser to benefit HIAS (Hebrew Immigrant Aid Society), the specific charity that the Pittsburgh murderer named before he carried out his deadly anti-Semitic attack.
The vision is to deliver the play’s message on a national scale by staging local readings on eight different nights in eight different cities across the country over the next year.  The initial reading will be presented by Curious Theatre in association with Theatre Or in Denver, CO.  Rabbi Marc Soloway will be part of this reading at the Curious Theatre on Sunday night, December 9th at 6:30pm.  Tickets at www.curioustheatre.org. They call me "NewsHound IV," because I'm a clever Finnegan, sniffing out stories all over the Boulder area. I love Jewish holidays because the food is GREAT, especially the brisket. Well all the food. I was a rescue pup and glad to be on the scent!
Previous Tessa Goldman Bat Mitzvah
Next Join Us for a Friday Night Chanukah Dinner