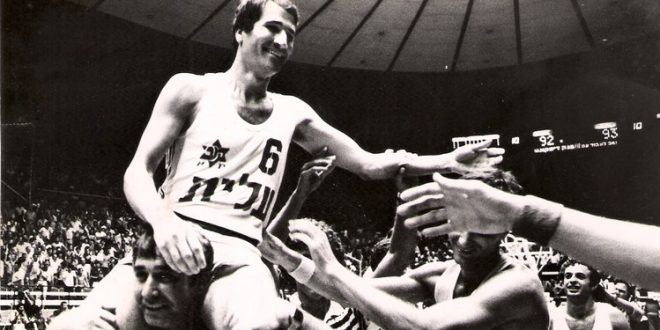 He’s been called the messiah of Israeli basketball.

And on March 9 at the Boulder JCC, he will be shooting hoops and answering questions following the screening of the acclaimed new documentary based on his moment of glory.

The opening night gala of the Boulder Jewish Film Festival features a casual pre-show ball food – including a gourmet kosher hot dog bar – and an opportunity to spend court time with Brody in our new gym.

“On the Map,” produced by festival friends Nancy Spielberg and Roberta Grossman, screens at 7:00 pm in Levin Hall, followed by a Q&A with director Dani Menkin and Tal Brody.

The celebrated film tributes a turning point in Israeli history when sports met politics at the 1977 European Cup championship. When tiny David beat the Soviet giant, the world came to an end. This was not supposed to happen. The symbolism and the pitch of emotion were almost too much to believe.

After the earth-shattering game, Brody was interviewed. His short quote is now ingrained in the collective memory of every Israeli since it was uttered in 1977. “We are on the map!” Brody said, electrically. “And we are staying on the map–not only in sports, but in everything.”

The recent Naismith Hall of Fame Nominee had a chance to play in the NBA, but decided to play professional basketball in the Jewish homeland. He is still a hero there today:

“It’s been almost 50 years, but people still stop Tal Brody on the streets of Israel and shake his hand. Or they wave and smile from a distance, all hoping to make contact with a national hero. Brody helped snap the country out of its deep funk following the 1972 Olympic Massacre and the 1973 Yom Kippur War. And no, he isn’t a politician or military hero. He was captain of the Maccabi-Tel Aviv basketball team that captured the 1977 European championship — and the heart of a nation.”

He’s is at the center of an exciting new documentary about that season, “On the Map,” by Dani Menkin (“39 Pounds of Love,” “Is That You?”)  Read more.

In addition to the article in the Forward, Tablet Magazine also recently wrote about the sports star now reliving his past as he tours film festivals across the country: Click here to read.

Kathryn has spent her professional life writing about, teaching, and presenting the arts. Founding Director of the Boulder Jewish Film Festival, Kathryn was Director of Menorah and ACE at the Boulder JCC from 2003 through August, 2019. The former film and theater critic for the Boulder Daily Camera, Kathryn is the author of "The Fifty Greatest Jewish Movies" and "The Fifty Funniest Films of All Time." kathryn.bernheimer@gmail.com
Previous Sacred Transition: Jewish Approaches to Death and Dying
Next Taste of Kevah Pre-Purim Event: “Queen Esther: Nasty Jewish Woman of Her Time?”