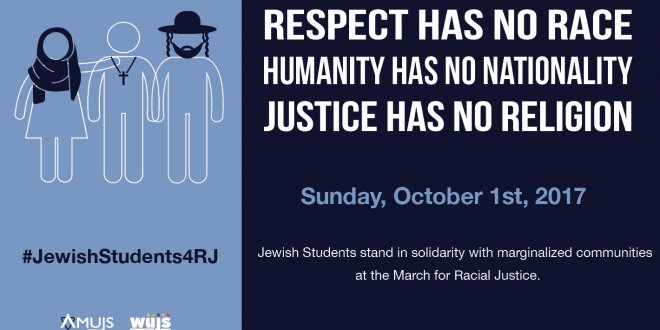 On October 1st the American Union of Jewish Students are coordinating delegations of Jewish students to join the March for Racial Justice in its sister cities — New York and New England.

For generations, the Jewish community has stood with our allies and marched, sat-in, walked-out, blocked bridges, protested and educated our shared society about these issues in a struggle to transform the policies that produce injustice. We continue their legacy and stand in full solidarity with the organizers of the March for Racial Justice on September 30th and October 1st. We, the Jewish youth community, join the March for Racial Justice on in the sister marches around the world and say to our fellow Jewish youth and the global community: #JewishStudents4RJ #M4RJ

From the March for Racial Justice Committee:

“The March for Racial Justice is committed to standing for racial justice with allies from across all races, ethnicities, and communities. We believe that none of us are free until all of us are free.

We are marching in solidarity with our Jewish brothers and sisters who are observing the holiest of days on the Jewish calendar. Holding fast to Jewish tradition is also an act of resistance, in the face of growing anti-Semitism. We recognize and lift up the intersection of anti-Semitism and racism perpetrated by white supremacists, whether they wave Confederate flags, don swastikas, beat and kill people on the streets in Charlottesville, deface Holocaust memorials, or threaten and harass members of our communities and our religious and community spaces. And we recognize the need for all of us to work together in the face of an administration that condones widespread oppression of all those most vulnerable among us.”

They call me "NewsHound IV," because I'm a clever Finnegan, sniffing out stories all over the Boulder area. I love Jewish holidays because the food is GREAT, especially the brisket. Well all the food. I was a rescue pup and glad to be on the scent!
Previous Weekly Edition: September 24th, 2017; Rosh Hashanah Special
Next Celebrate Sukkot at a Colorado Icon