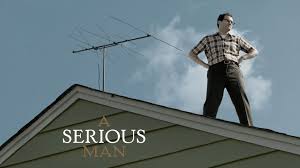 For Movie Fans: “A Serious Man” and “In Search of General Tso”

Kathryn Bernheimer January 18, 2017 Arts & Culture Comments Off on For Movie Fans: “A Serious Man” and “In Search of General Tso”

The Movie Mavens Club continues with “A Serious Man” on January 25 and Now Showing at the J presents “In Search of General Tso” on January 26.

The Movie Mavens Club is designed to showcase important titles in the history of Jewish film. The titles can be watched at home, or just prior to the screenings. “A Serious Man” DVD can be checked out at our front desk, or rented on Amazon Prime. The book-club style program features an hour conversation led by Kathryn Bernheimer, who begins each program with background information and facilitates discussion.

The Coen Brothers entire canon has a distinctly Jewish flavor. Many films are peppered with Jewishisms: “I don’t roll on Shabbos,” from “The Big Liebowski” being a famous example. But “A Serious Man” is their most thoroughly Jewish movie, beginning with the plot that recalls the Biblical story of Job. Dark and disturbing yet wildly amusing, this Coen classic is sure to spark conversation.

Now Showing at the J is a monthly screening of a recent film followed by 20-30 minutes of discussion. This month’s title is “In Search of General Tso,” a highly entertaining look at the history of Chinese food in America, including the very real reasons behind the Jewish affinity for Chinese food.

See all of the spring series films below.

NOW SHOWING AT THE J In honor of Chinese New Year, we present this fascinating look at the history of Chinese food in America, including the unique culinary relationship between Jews and Chinese food. February 23: “The Dis-Honesty Project: The Truth About Lies”

When do we lie? How often? Why? Are we as honest as we say we are? The answers may surprise you as Israeli behavorial economist Dan Ariely engages in experiments and studies, interviews experts – and expert liars – to reveal how and why people lie. The quintessential New Yorker, combative, funny and blunt, Ed Koch was mayor from 1978 to 1989, an era of graffiti, near-bankruptcy and crime. Before his death in 2013, the intensely private man recalled his life and legacy for this candid last testament to a thoroughly Jewish public servant. Volker Schlondorff’s latest feature film speculates on a fascinating moment in history, as Hitler plans to destroy Paris – its citizens to be swept away with its famous landmarks, monuments, museums, and art. One man stands between this cultural genocide, armed only with diplomacy. Born to a Jewish family, yet suspiciously dark skinned, a young woman learns the truth of her heritage as a teenager and makes a film recording her journey to an authentic identity.

Screenings at 11:30 am. (Except Exodus) Bring a brown bag lunch! The Coen Brothers’ most Jewish film to date, this 2009 black comedy-drama is a retelling of the Biblical story of Job, with Michael Stuhlbarg as a man beset by a series of misfortunes. Based on the darkly absurd Issac Bashevis Singer novel about the walking ghosts in post-Holocaust New York, and brilliantly directed in 1989 by Paul Mazursky, this tortured tale unfolds in New York, where a hapless survivor (Ron Silver) finds himself bound to three women (Anjelica Huston, Lena Olin, Margaret Sophie Stein). Woody Allen gets serious, and seriously Jewish, in this “dark night of the soul” film about two men who view their problems from quite different moral perspectives. Allen’s rumination on Jewish values may surprise you. One of the few acts of revolt in the camps took place when a group of Sonderkommandos attempted to blow up a crematorium at Auschwitz. This rare feature film follows the grim exploits with the kind of integrity “Son of Saul” displayed – and features a similar story. Directed by Tim Blake Nelson, and starring David Arquette, Steve Buscemi, Harvey Keitel, Mira Sorvino Arguably the greatest Jewish movie ever made, Exodus was hugely impactful, marking a shift in the culture toward Israel. This seminal drama, based on the book, redefined forever the image of the Jew on the screen.

Kathryn has spent her professional life writing about, teaching, and presenting the arts. Founding Director of the Boulder Jewish Film Festival, Kathryn was Director of Menorah and ACE at the Boulder JCC from 2003 through August, 2019. The former film and theater critic for the Boulder Daily Camera, Kathryn is the author of "The Fifty Greatest Jewish Movies" and "The Fifty Funniest Films of All Time." kathryn.bernheimer@gmail.com
Previous Don’t Miss Shabbat on Skis
Next Knight Cities Challenge Names 144 Finalists, 2 in Boulder