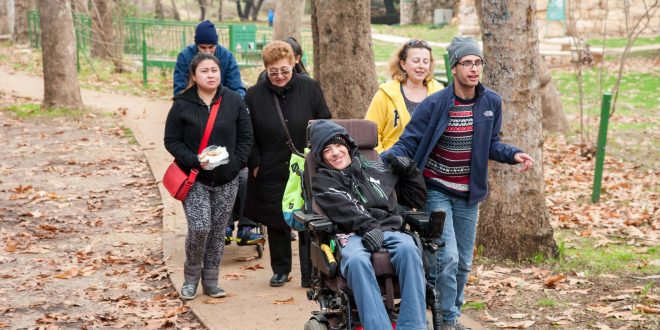 Marina Brodetsky April 30, 2017 Guests and Blogs Comments Off on Enchanting and Accessible Forests When Leah Boncher moved to Israel from Houston last June, she did not know whether she would be able to continue her passion of enjoying the great outdoors that she has had since she was a girl scout more than 50 years ago.

Boncher, 62, is legally blind and is only been able to see out of one eye. When she heard that the Jewish National Fund (JNF) and the Nefesh B’Nefesh, an organization that facilitates immigration to Israel, were co-sponsoring a tour for individuals with disabilities and special needs to the Hemed Forest located just outside Jerusalem, she did not hesitate to join. In coordination with partner LOTEM-Making Nature Accessible, an organization that offers accessible hikes and educational nature activities around the country to close to 35,000 children and adults per year with special needs, JNF is able to make Israel’s forests and parks accessible to the country’s special needs and disabled community.

“I love nature and I liked hearing about the work being done to allow people with disabilities to come here, but I mostly liked learning what the guide taught us about the trees,” Boncher said.

Making her way through the forest with the help of a friend, Boncher noticed plenty that has been done to enable people with a wide variety of disabilities to go on the trail. The paths on the trail are paved and have raised edges to help people with canes and walking sticks. The railings are placed at a level to be accessible to people in wheelchairs. JNF has also been working on placing braille signs in parks and forests, and making sure playground equipment, picnic areas, and toilets can accommodate physically challenged children of all ages. But there’s still a lot of work to do.

“LOTEM believes everyone, regardless of their abilities, should be able to experience the land of Israel in all of its beauty,” JNF LOTEM Liaison Alisa Bodner said. “We revolutionize accessibility not just by building a trail. We also help the blind and the mentally and intellectually challenged.”

JNF helped develop the HaShofet River trail in Northern Israel that is completely wheelchair accessible. Its ring trail begins and ends at a small waterfall, and at its foot there is a small wading pool that leads downstream to a dam.

Bodner said she believes Israel can be a model to the world, teaching inclusion and accessibility in nature. “Getting out of their four walls represents freedom for them,” Bodner said. “It makes individuals with disabilities feel that they are part of society, because they, too, are touring trails during national and religious holidays in the country.” A club of stroke victims in Haifa recently toured the HaShofet trail during an outing organized by LOTEM. There were 12 people aged 51 to 78, including two in wheelchairs.

“They had never experienced such things before,” said club coordinator Zvika Strassberg. “The path was blooming, but some of us who live nearby had not seen it in years. It was a really emotional experience.”

Irina Pinskoy’s 18-year-old son, Alexander, was born paralyzed due to cerebral palsy. She brought him to Hemed Forest last Chanukah on a tour with other special needs families organized by LOTEM. Pinskoy has been raving about the experience ever since.

“It’s hard to find places you can go to with a wheelchair,” said Pinskoy, who lives in Rishon LeZion. “My son loves traveling, and he was happy with the trip organized for us. It was a wonderful experience for all of us. Israel still has a ways to go, but it’s great that it’s getting better and more accessible.”