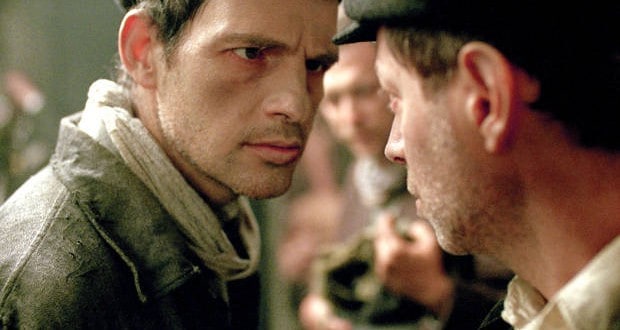 Kathryn Bernheimer February 29, 2016 Arts & Culture Comments Off on The Oscars May Be Kinder to Jews than Blacks – Especially Jack Black I won an Oscar last night. Well, sort of. “Son of Saul,” which closes the Boulder Jewish Film Festival, won the Academy Award for best foreign film. I was elated by the victory.

I’d like to thank the members of Menorah, the Boulder JCC, Sony Pictures Classic, the Dairy Arts Center, The Telluride Film Festival, Jonathan Lev, Susan Litt, Glenn Webb and my parents – Holocaust refugees – for this honor. As for my husband, “Ani ohev otach.”

Israeli actress Milli Avital, who joined her husband at the Oscars in an Israeli designer dress by Vivi Balaish, starred in “Hatufim,” a great Israeli TV show on which “Homeland” is based. (“Hatufim” is one of the Israeli TV shows we hope to play at the J in the future.)

This sweet moment was but one of many Jewish highlights of an Oscar show ferociously focused on the black diversity issue, both in earnest and in occasional jest.

“Son of Saul,” was expected to win, based on the deluge of media coverage it has received and the general sentiment that this Hungarian drama redefines the Holocaust film.

What you probably did not notice is that as first-time director Laszlo Nemes left the stage, music by Wagner – a noted anti-Semite once banned in Israel – inappropriately began to be played before it was abruptly changed to the theme from “Star Wars.”

I first saw “Son of Saul” at the Telluride Film Festival in early September. I walked out into the blazing mountain sun feeling stunned and dazed. Indeed, despite having seen literally hundreds of Holocaust films, I felt I had seen something new, which plunged me into the chaos of the crematoria and the unrelenting hell of Aushwitz, where one Sondercommando struggles with an impossible mission.

The first-time director and the multi-talented star both attended Telluride, and made powerful points about the responsibility of realistically depicting the Holocaust on film.

It was Brie Larson, winning best actress for “Room,” however, who brought me back to Labor Day weekend, when I saw “Room,” as well as “Son of Saul.” She thanked the Telluride Film Festival for discovering and supporting the film – a key to its journey to the Oscars. Indeed, behind all the glamor of the red carpet are many similar stories of worthy films struggling to find a distributor, to just be seen by the public, never mind to land a prize as coveted as best actress. I confess feeling a tingle of pride at being among those who stood in line to see “Room,” and helped generate the buzz that changed the film’s fortunes.

There were other moments to cheer. After the befuddling barrage of technical awards for “Mad Max: Fury Road,” and the anticipated best director and actor prize for the over-rated “The Revenant” I was thrilled that the far more deserving and important “Spotlight” won best picture. The good news for Jews about “The Revenant” is that cinematographer Emmanuel Lubezki won his third consecutive Oscar for it.

Also in the good-for-the-Jews category, “Amy” – also as expected – won best documentary for its sympathetic portrayal of the troubled Jewish singer

While I felt Chris Rock had his ups and downs as host, two Jewish comedians fared well as presenters. Sara Silverman and Sasha Baron Cohen (returning as word-mangling rapper Ali G) livened up the evening by making fun of James Bond and the Minions, respectively.

Perhaps the best Jewish jab, though, came by way of a Jewish comic not even in attendance.  In a short spoof video, dubbed a Black History Month Minute, honored Joe Black.

To purchase tickets to “Son of Saul,” CLICK HERE.

Kathryn has spent her professional life writing about, teaching, and presenting the arts. Founding Director of the Boulder Jewish Film Festival, Kathryn was Director of Menorah and ACE at the Boulder JCC from 2003 through August, 2019. The former film and theater critic for the Boulder Daily Camera, Kathryn is the author of "The Fifty Greatest Jewish Movies" and "The Fifty Funniest Films of All Time." kathryn.bernheimer@gmail.com
Previous History Still Refuses to Judge Holocaust Rescuer Rudolph Kasztner
Next Teens: Facing Orientation: Gender, Sex, and Identity