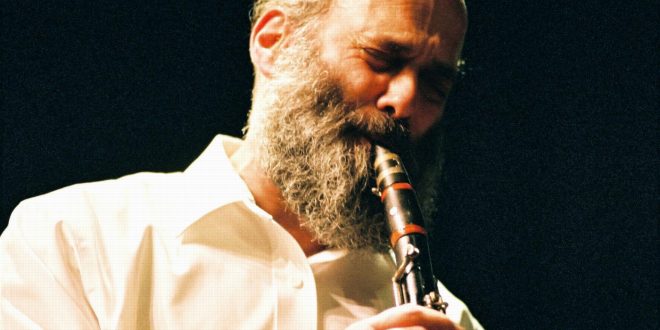 More Reasons Not to Miss Andy Statman This Weekend

If you are hesitating about attending the Music and More Festival concert with headliner Andy Statman, perhaps the fact that discounted tickets are available might convince you to expand your musical horizons. Students are free. (Details below.)

If you don’t know Andy Statman, you might not want to spend an evening in his musical company. Allow me to introduce him with paltry words.

How to define Andy Statman? Of course, hearing him is the only way to understand the unique fusion – and juxtaposition – of genres and styles in his original compositions. I could tell you he is regarded as a master of both mandolin and clarinet. I could say his music blends klezmer, bluegrass, jazz, Hasidic and Jewish devotional music. He bounces between traditions easily. In 2000 he released Klezmer: From Old World To Our World and the next year came out with Bluegrass Mountain Style.

In 2012, Statman was the recipient of an NEA National Heritage Fellowship for his work in bluegrass and Klezmer music, the nation’s highest recognition for traditional and folk art.

He has been hailed by The New Yorker as an “American visionary” and by the New York Times as a “virtuoso.” His white shirt, beard and velvet yarmulkes also display the fact that Statman is an Orthodox Jew.

Statman grew up in Queens to a traditional, yet secular Jewish family from an unbroken chain of cantors going back to the 1700’s. His house was steeped in both vaudeville and Klezmer traditions. His cousin, Sammy Fein, originally Feinberg, a self-taught musician and composer, won two Academy Awards for Best Original Song. Statman taught himself guitar and banjo after his brother brought home a record of Lester Flatt and Earl Scruggs. A musical prodigy, in his teens he took up mandolin and became a well-known bluegrass musician under the tutelage of David Grisman, with whom he was to record “Songs of our Fathers” in 1995. As the Klezmer revival began in the 1980’s and 90’s, Statman found himself more and more in demand, performing on records for the Grateful Dead and Bob Dylan. “I didn’t intentionally start the revival, I was just doing it for myself to preserve the music,” Statman said. “I wasn’t reviving something, I just wanted to keep it alive. And the whole thing sort of blossomed.”

Statman has appeared on more than one hundred recordings, including more than twenty under his own name. He has recorded and/or toured with the Grateful Dead, Bob Dylan, Ricky Skaggs, Béla Fleck, David Grisman, Itzhak Perlman, Vassar Clements, Stéphane Grappelli, Paul Shaffer and Kenny Werner. A Grammy nominee, Statman has been the subject of dozens of feature articles in publications including The New York Times, Billboard and Rolling Stone. He gives master classes in colleges and music camps and has authored several music books and produced instructional DVDs. Now 66, Statman has evolved as all great artists do, and his style is uniquely his own. I have listened to most of his 30 albums, including the most recent Superstring Theory, recorded with Tim O’Brien and Michael Cleveland, yet I can’t be sure what he will play on Sunday. But here’s a sample, so listen for yourself. CLICK HERE to see Statman perform Surfin’ Slivovitz.

Students, free in advance and at the door. Please email jodi@boulderjcc.org with your name and number of tickets you would like.

For discounted tickets, made possible by an anonymous donation, Kathryn at 720-749-2530, or email kathryn@boulderjcc.org.

Kathryn has spent her professional life writing about, teaching, and presenting the arts. Founding Director of the Boulder Jewish Film Festival, Kathryn was Director of Menorah and ACE at the Boulder JCC from 2003 through August, 2019. The former film and theater critic for the Boulder Daily Camera, Kathryn is the author of "The Fifty Greatest Jewish Movies" and "The Fifty Funniest Films of All Time." kathryn.bernheimer@gmail.com
Previous Stand Together!
Next Weekly Edition: November 11th, 2016