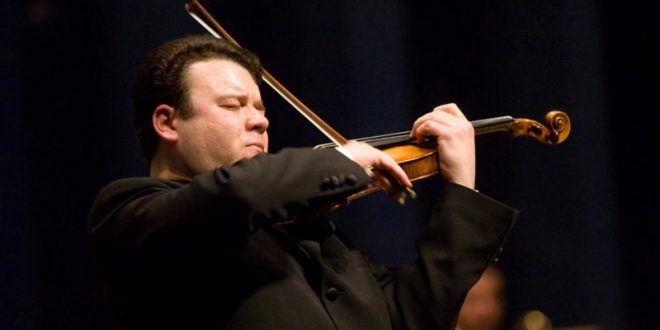 Israeli Violinist Shares His ‘PASSIONS’ with ACE at CMF

Almost every summer for the past 10 years, I purchase 50 group-discounted tickets to an appropriate concert at the Colorado Music Festival, and Ellen and Josh Taxman graciously agree to open their beautiful home and yard adjacent to Chautauqua for a wine, cheese and dessert reception. A signature ACE event, the CMF summer evening is always magical. This year, choosing the concert was made easy by the festival’s inclusion of Israeli violinist Vadim Gluzman as artist in residence.

Noted internationally for extraordinary artistry that brings back to life the glorious violinistic tradition of the 19th and 20th centuries, Gluzman’s wide repertoire embraces contemporary music and his performances are heard around the world through live broadcasts and a striking catalogue of award-winning recordings.

On Thursday, July 21 at 7:30 pm in Chautauqua Auditorium, Gluzman performs Russian Passions, a program that includes Liadov’s The Enchanted Lake; Tchaikovsky’s Violin Concerto in D Major; and Mussorgsky’s Pictures at an Exhibition. (See CMF description below.) There is a free talk in the tent prior to the concert at 6:30 pm.

A few tickets still remain, and anyone who already has tickets can attend the reception for $25. To purchase, CLICK HERE.

“Violinist Vadim Gluzman concludes his residency by returning to the stage as soloist in Tchaikovsky’s monumental Violin Concerto – one of the most technically difficult works for the instrument. Music Director Jean-Marie Zeitouni and the CMF Orchestra also present Anatoly Liadov’s brief, but transcendent “Enchanted Lake.” For the second half of the program, Modest Mussorgsky’s vivid and ponderous “Pictures at an Exhibition” is paired with stunning new projected animation developed by a team of professors and students at the University of Southern California to celebrate the opening of Frank Gehry’s stunning New World Center in Miami.”

Kathryn has spent her professional life writing about, teaching, and presenting the arts. Founding Director of the Boulder Jewish Film Festival, Kathryn was Director of Menorah and ACE at the Boulder JCC from 2003 through August, 2019. The former film and theater critic for the Boulder Daily Camera, Kathryn is the author of "The Fifty Greatest Jewish Movies" and "The Fifty Funniest Films of All Time." kathryn.bernheimer@gmail.com
Previous Artisan Challah Available Every Week from Bonai Shalom
Next JEWISHcolorado and CAJE Announce Formal Merger