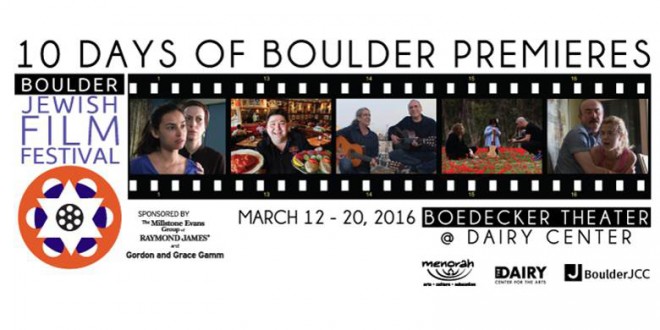 Kathryn Bernheimer March 9, 2016 Arts & Culture Comments Off on Israel Is in the Spotlight at the Boulder Jewish Film Festival’s Opening Weekend It will be “déjà vu all over again” when the Boulder Jewish Film Festival opens Saturday with “Our Boys,” directed by Academy Award winning director Richard Trank. Last year, Trank was in Boulder for a tribute program that included the area premiere of “The Prime Ministers,” as well as screenings of five earlier films.

His very latest – the 14th documentary produced by Moriah Films – examines the events surrounding the kidnapping and murder of three Israeli youths by Hamas in the summer of 2014. The parents of each boy recall their short lives and how this tragedy has impacted them. Arab affairs analyst for Israeli TV Ehud Yaari and author Yossi Klein Halevi discuss why the kidnapping and murder of the boys so dramatically galvanized Israel. “Our Boys” is an emotionally poignant and insightful film that also looks at how events during and after the Gaza war have led to the greatest resurgence of anti-Semitism in Europe since the defeat of the Nazis in 1945. On Sunday, the gala grand opening features “Dove’s Cry,” directed by Ganit Ilouz, who will appear in person with her feature debut.

The film, which recently screened at The Other Israel Film Festival in NY and the Washington Jewish Film Festival, follows a young charismatic teacher from Wadi Ara who teaches Arabic in a Jewish primary school. We follow this brilliant, intrepid woman for a year, at her school and home. The daily interaction she has with pupils and staff opens a cross-cultural dialogue, challenging divisive stereotypes and building a connection between Muslims and Jews. This is juxtaposed against her daily struggles with being an Arab citizen of Israel and being a single Muslim woman in her late twenties. Equal parts inspiring and heartbreaking, Hadeel’s story offers an unflinching glimpse of Israel in all of its beautiful– and at times excruciating–complexity. Also on Sunday, Michael Kagan also returns to Boulder with his film, “Tunnel of Hope,” which focuses on his father’s experience during a mass escape during the Holocaust. Kagan lived in Boulder for many years and his visit is sponsored by Rabbi Marc Soloway and Congregation Bonai Shalom. The 1:00 pm screening is sold out, but tickets are available for the 10:45 am showing.

On Monday, the two Israeli filmmakers will discuss current cinema in Israel at a panel at 1:00 pm in the Boedecker Theater. The panel is free, and reservations can be made online. Sunday’s 3:30 screening of “Belle and Sebastian,” an adventure film about a young boy and a “wild” dog. based on the beloved children’s book, is sold out. Tickets are available for the screening on Sunday, March 20 at 11:00 am. Set in the Alps and featuring stunning cinematography, this family film fosters an appreciation of nature.

Kathryn has spent her professional life writing about, teaching, and presenting the arts. Founding Director of the Boulder Jewish Film Festival, Kathryn was Director of Menorah and ACE at the Boulder JCC from 2003 through August, 2019. The former film and theater critic for the Boulder Daily Camera, Kathryn is the author of "The Fifty Greatest Jewish Movies" and "The Fifty Funniest Films of All Time." kathryn.bernheimer@gmail.com
Previous Jewish Grief Support Group To Begin in April
Next A Shabbat Nugget: Parashat Pekudei