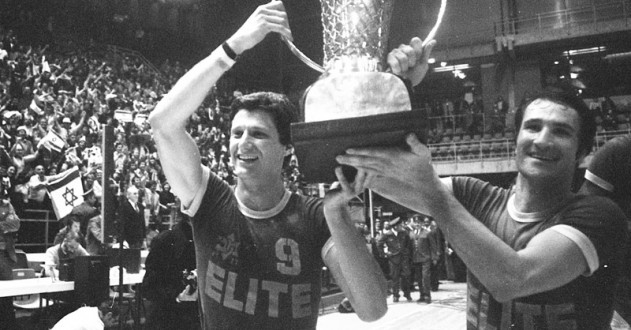 If You Liked “Above and Beyond,” You Will Love “On the Map”

Kathryn Bernheimer March 1, 2016 Arts & Culture Comments Off on If You Liked “Above and Beyond,” You Will Love “On the Map”

At last year’s Boulder Jewish Film Festival, producer Nancy Spielberg appeared in person with “Above and Beyond,” directed by Roberta Grossman, whose earlier film, “Hava Nagila (The Movie)” closed BJFF 2.

The two powerhouse filmmakers  – whose work is unparalleled in the Jewish film world – have joined Israel Academy Award-winning filmmaker Dani Menkin (whose film, “Dolphin Boy,” was shown in BJFF 2) as executive producers on his new film, “On the Map.” They describe the project as “a great mash-up between a heart-pounding David vs. Goliath sports story and a moving account of a difficult time in Israel’s history. ​ It is the rare film that is both hugely entertaining and Israel-posi​tive.”

In short, the filmmakers promise that if you liked “Above and Beyond,” you are going to love “On the Map.” I, for one, believe them.

The film follows the Maccabi Tel Aviv basketball team, lead by American ​All-Star Tal Brody, when it unbelievably won the European National Championship.  The story takes place in 1976 against the backdrop of the Yom Kippur War, the raid on Entebbe and the murders of the Israeli athletes at the Munich Olympics.​

The filmmakers are now raising final post-production funds for through an online Jewcer campaign.

Here is a link to the film’s trailer and a short video  about why the filmmakers got involved. If you love what you see, please consider making a tax deductible donation of any amount to help finish the film.

And yes, “On the Map” will be shown at next year’s Boulder Jewish Film Festival!

Kathryn has spent her professional life writing about, teaching, and presenting the arts. Founding Director of the Boulder Jewish Film Festival, Kathryn was Director of Menorah and ACE at the Boulder JCC from 2003 through August, 2019. The former film and theater critic for the Boulder Daily Camera, Kathryn is the author of "The Fifty Greatest Jewish Movies" and "The Fifty Funniest Films of All Time." kathryn.bernheimer@gmail.com
Previous Welcoming More Families into Jewish Life through ECE Programs
Next Baruch Dayan Ha’emet: Laura Fischer z”l