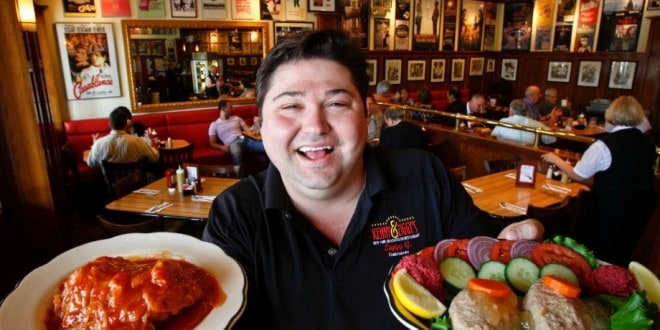 “Deli Man” comes with a warning from the Surgeon General: This movie will make you hungry. Actually, it will make you salivate. Another side effect is a profound sense of nostalgia. Symptoms may also include a sudden craving for bobka. The film will certainly induce fond memories of rude waiters, rye bread you can’t buy in stores, half-sour pickles with a little snap, and the distinct flavor of Dr. Brown’s Black Cherry soda. Should you plan to ignore the warnings and attend “Deli Man” at your own risk, be advised that your cravings will be temporarily alleviated.

Your $25 ticket to “Deli Man” includes a kosher deli meal. The pastrami and corned beef sandwiches have been generously provided by Grow and Behold, with kosher rye bread from Izzios. Coleslaw and pickles on the side, of course. For vegetarians, knishes will be available. You can even sip a Dr. Brown’s. After the film, chocolate bobka – shipped from New York – will be served.

The sandwiches will be available starting at 6:15 pm. Please plan to arrive no later than 6:45. The film will be shown at 7:15, after everyone has eaten.

And if the movie leaves you craving more movies about food, you won’t want to miss Closing Night’s “Dough,” sponsored by the Boulder Jewish News, about an Israeli baker (Jonathan Pryce) whose Muslim assistant starts adding pot to the bread. Business booms, friendship blossoms, love is in the air. And when you get the munchies, be sure to stay for our reception. We will serve brownies from Breadworks!

Kathryn has spent her professional life writing about, teaching, and presenting the arts. Founding Director of the Boulder Jewish Film Festival, Kathryn was Director of Menorah and ACE at the Boulder JCC from 2003 through August, 2019. The former film and theater critic for the Boulder Daily Camera, Kathryn is the author of "The Fifty Greatest Jewish Movies" and "The Fifty Funniest Films of All Time." kathryn.bernheimer@gmail.com
Previous Purim Seudah and Celebration At Bonai Shalom
Next A Shabbat Nugget: Parashat Vayikra