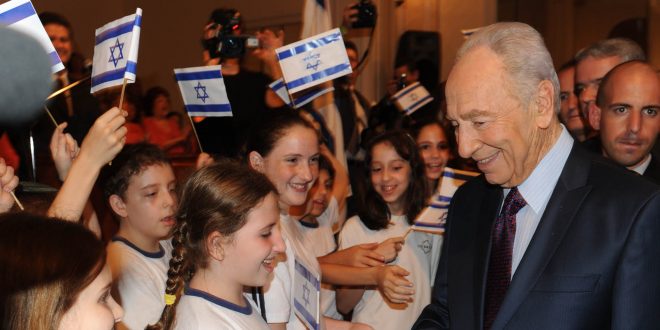 Boulder Jewish News bows its head in deep sadness at the passing of Shimon Peres; Israel’s Ninth President, former Prime Minister, Minister in numerous governments, Nobel Peace Prize Laureate, and a man of vision and of action passed away early this morning, Israel time, after suffering a stroke almost two weeks ago.

Shimon Peres was one of Israel’s founding fathers; he secured the country’s deterrent capability and its defensive strength in the early years, stood at the forefront of arming and building the IDF, established the reactor in Dimona and led the formation of Israel’s defense industries. He served the people of Israel for decades, from before the establishment of the State and until his final breath. Shimon Peres worked to establish true peace within Israel as well as between Israel and her neighbors, and stood at the head of the country’s transformation into a technological superpower – the Startup Nation.

As Prime Minister (1984-1986), Peres turned Israel’s economy around and saved it from collapse following the worst economic crisis in its history (with a peak inflation of over 400% per year) through his Economic Stabilization Program.

Shimon Peres believed that it was the right of every Jew in the world to live in Israel. As Prime Minister, he worked to open the gates of the Former Soviet Union and enable the immigration of Soviet Jewry to Israel, oversaw Operation Moses, during which 8,000 Ethiopian Jews were brought to Israel, and pushed for the release of the Prisoners of Zion.

As President, he worked to promote Israel’s standing in the world and established centers to encourage breakthrough Israeli science and innovation. In recent years he secured the necessary resources and opened research funds at Israeli universities, which contributed to the development of Israeli science and to breakthroughs in a variety of fields including neuroscience, robotics and nanotechnology. In July 2016, Shimon Peres laid the cornerstone for the new Israeli Innovation Center at the Peres Center for Peace in Jaffa, together with the Israeli Prime Minister and President.

It is with great sadness that we part from one of Israel’s great leaders, a man who devoted his life to the service of his country and loved the people of Israel with all his heart.

May his memory be for a blessing.

They call me "NewsHound IV," because I'm a clever Finnegan, sniffing out stories all over the Boulder area. I love Jewish holidays because the food is GREAT, especially the brisket. Well all the food. I was a rescue pup and glad to be on the scent!
Previous From the Farm to Your Plate: Ethical Meat Production and Kosher Slaughter
Next Shabbat Nugget: Rosh Hashanah