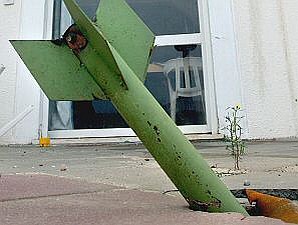 As Rockets Fly, Music Serves as a Symbol of Defiance and Resilience

Kathryn Bernheimer February 28, 2016 Arts & Culture Comments Off on As Rockets Fly, Music Serves as a Symbol of Defiance and Resilience Picking a favorite film is a little like picking your favorite food. The truth is, no one can live on chocolate alone, no matter how delicious it is.

Cinematic consumption is also based on personal taste, and a film festival provides a feast to satisfy all cravings. There are tantalizing appetizers, hearty entrees, savory sides and divine desserts. Together they make a scrumptious and nourishing meal.

Still, I am frequently asked which films in the festival I like the best. In other words, which course should you not skip?

In the coming weeks I will be writing about all 19 titles being shown at our 26 screenings. But where to start? I can’t say “Rock in the Red Zone” is the “best” film in the festival. However, I don’t think there are any better ones.

I was already a fan of director Laura Bialis when I sat down to watch her new documentary about the thriving music scene in Sderot, the Israeli border town under constant rocket barrage from Gaza.

Not to give too much away, but the documentary charts the director’s transformation from observer to participant. The film itself offers a transformative experience that is a genuine punch to the gut. At once heart-wrenching, hopeful, and high-spirited, “Rock in the Red Zone” invites viewers inside a bomb shelter after the sirens have gone off – leaving residents with 15 seconds to take refuge. It’s a scene I am not likely to forget, a scene Hollywood could never conjure with the same authentic power.

The unique plight of Israelis living in Sderot is not the film’s subject, but rather its background. The film focuses on a reaction to the pressures and stress of life in Sderot, which is known throughout Israel as a musical mecca. How and why Sderot has become known for its local bands and frequent concerts is the question Bialis set out to explore. She found more than she expected. Is music a political act? Can it be construed as an expression of defiance and resilience? Is it a symbolic sign of solidarity? Does it provide comfort and solace?  Does music give voice to a people? Is it a source of dealing with trauma?

You will have to see “Rock in the Red Zone” to contemplate the power of music to transcend the darkness and to combat inhumanity. The Jewish National Fund is the sponsor of “Rock in the Red Zone,” in honor of the playground it built in Sderot in 2009. This 21,000-square-foot secure indoor playground and community center is Israel’s largest such facility. The $5 million Sderot Indoor Recreation Center has brought a welcome sense of normalcy to the region, providing young people with a fun place to simply be kids and parents with the peace of mind that their children are playing in a safe environment. Constructed in an old textile warehouse and retrofitted with 300 tons of steel, it features play areas that double as bomb shelters, ensuring that all occupants can quickly reach safety in the event of a “Code Red” rocket alert. To view a video about the project, CLICK HERE.

For tickets to the Boulder Jewish Film Festival CLICK HERE.

Kathryn has spent her professional life writing about, teaching, and presenting the arts. Founding Director of the Boulder Jewish Film Festival, Kathryn was Director of Menorah and ACE at the Boulder JCC from 2003 through August, 2019. The former film and theater critic for the Boulder Daily Camera, Kathryn is the author of "The Fifty Greatest Jewish Movies" and "The Fifty Funniest Films of All Time." kathryn.bernheimer@gmail.com
Previous 2016 JCC Maccabi Games and Artsfest Informational Meeting
Next Teens: BJTI Ski Day Sun Day