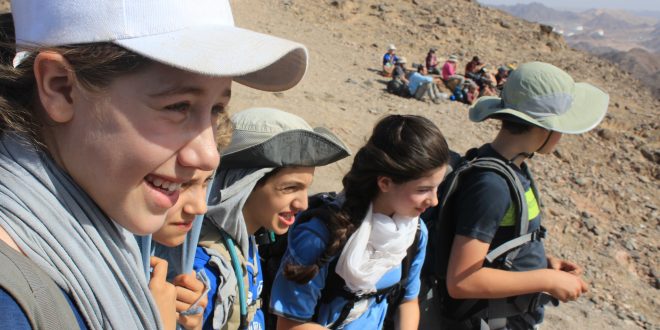 As Israel prepares to celebrate its 68th year of independence, and remembers the brave soldiers, officials and kibbutzniks who helped secure its nationhood, one group stands out for consistently growing the next generation of Israeli leaders. Green Horizons, a 40-year-old youth group with over 3,000 participants hailing from all corners of Israel, continues to forge tomorrow’s ministers, chief executives and leading entrepreneurs by having them unplug and head back to nature.

“We don’t let the kids use smart phones or tablets,” said Ido Reichman Eisikovits, a spokesperson for Green Horizons, which is called Hugey Sayarut in Hebrew and akin to the national Boy and Girl Scouts in the U.S.

The restrictions against distractions are due to the real challenges, hazards, and rough natural setting that each child faces during their time with Green Horizons.

“It’s sometimes very scary,” said Eisikovits. “You tell a kid in the fifth grade, ‘Today, you will be on a three-day hike, hike up huge mountains, carry everything on your back, and when you finish, you will need to cook for yourself and sleep under the stars.’”

But the rewards are priceless. “If they do it for one night, it will blow their mind, adds Eisikovits.”

For many children who live in economically disadvantaged areas outside central Israel, it’s essential for them to get out and explore Israel’s greener side. Much of Green Horizon’s programming is made possible through the support of Jewish National Fund (JNF), which has also created subsidies and helps the program reach out to kids who otherwise couldn’t afford its programs. Recently, Eisikovits accompanied one group camping overnight in the desert. “One of the boys suddenly asked the guide, ‘What are all the dots in the sky?’ He’d always thought there were only three stars—the boy had never left his Western Galilee town of Akko, and had never spent a night outdoors or experienced the sounds of nature. When we take the kids camping, there are no cars, no TV, no PlayStation, no XBox, and no music.”

So how does roughing it translate to creating and fostering future leaders? Tomer Barel, senior vice president and chief risk officer for PayPal, joined Green Horizons in sixth grade and credits the group as “a very important part of shaping my future skills as a leader.”

“The first time I ever cooked for myself was in Hugey Sayarut. The experiences of cooking for myself, finding a place to sleep, and facing new challenges taught me a lot. You also learn how to operate as a team and how to face tough challenges together,” said Barel.

These are vital skills that are essential in today’s business environment.

“Many people that I hire in Silicon Valley are young people straight out of college, and they just don’t know how to take care of themselves. What’s really unique about Hugey Sayarut is being taught to be self-sufficient, organized, and how to take care of yourself.” Many graduates of Green Horizons have gone on to assume leadership roles in the army, in business, technology, and other fields. Gadi Tirosh, managing partner for Jerusalem Venture Partners, reminisced, “I would say that Green Horizons was more extreme back in the 1980s. We had no way of actually communicating and we were a group of teenagers hiking alone in the wilderness. We used to hike for days in the Arava Desert, carrying all our supplies on our backs.” Though Tirosh’s experience was some 30 years ago, his four sons have all participated, and he, too, still draws on lessons learned from Green Horizons in the business world.

“First and foremost is independence: learning to trust your abilities, which may at times require you to go beyond your comfort zone. Then there is the power and importance of team work. As a teenager dealing with extreme situations in the wilderness, it becomes clear that you cannot face the situation alone and without a team effort,” said Tirosh.

Yotam Fradkin, a 29-year-old group leader for Green Horizones, was returning from a hiking trip on April 21 with his group of 15-year-olds when their public bus crashed inside Haifa’s Carmel Tunnel, killing a passenger. Thinking quickly, Fradkin first checked his group—all of whom sustained minor injuries—then helped an injured older man. After turning over the old man’s care to rescuers, he led the group almost a mile to the tunnel’s exit.

“The power of the group was extraordinary,” said Fradkin. “I was able to trust them to follow me.” He credits Green Horizons for on-the-spot thinking the emergency demanded. “The situations that we’d been in before – and also our travel in the desert – it all came together.” Beyond navigation and survival skills, Green Horizons also explores Jewish history in a concrete and personal way, said Eisikovits. “You can teach a kid in a classroom or on a computer how David fought Goliath, or you can drive to the Elah Valley and experience where the battle took place.”

Barel said Green Horizons imparted a lifelong love of exploring nature, so much so that on a recent sabbatical from work, he took 15 days to trek the Israel National Trail, which runs from the Lebanon border to Eilat in the south. “I missed being in nature so much that I dedicated a big part of my leave to just hiking, and it was phenomenal.”

And did the PayPal executive switch off his smart phone? “I did not,” he admitted; he needed to stay available for his family. But he said, proudly, that he didn’t peek at his e-mail while he was hiking. “It was the first time in seven years.”