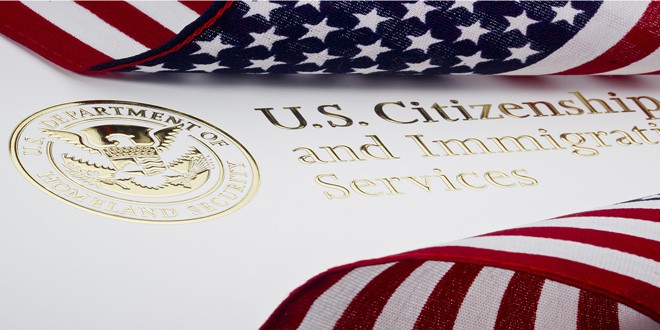 On Becoming a US Citizen

Rabbi Marc Soloway December 20, 2015 Guests and Blogs, News Comments Off on On Becoming a US Citizen Wednesday December 16th, I was officially sworn in as an citizen of the United States, which was an extraordinary experience that actually gave birth to a surprising range of emotions. It was very moving to see 50 or so people becoming citizens from 29 different countries, including Belgium, Bhutan, China, Cote d’Ivoire, the Czech Republic, Egypt, Ethiopia, Germany, Iran, Iraq, Israel, Italy, Mexico, Russia, South Korea, United Kingdom and Vietnam.

For some of these new citizens, the process has been grueling and the end of a very long journey and the sense of joy and excitement in the room was palpable. Truthfully, I found it hard to say the Oath of Allegiance, especially the part that says “I will bear arms on behalf of the United States when required by the law.”

Along with a flimsy American flag that may have been made in China, we received a packet full of goodies, including a message from President Obama addressed to “Dear Fellow American.” It included a section that said, “Our democratic principles and liberties are yours to uphold through active and engaged participation. I encourage you to be involved in your community and to promote the values that guide us as Americans: hard work and honesty, courage and fair play, tolerance and curiosity, loyalty and patriotism.”

I couldn’t help wondering how this letter might change under the leadership of some of the current Presidential hopefuls, but don’t want to go there right now. I find the President’s words moving as an invitation to get involved in this country’s destiny. Our certificates of naturalization were presented to us by the Secretary of State for Colorado, who reminded us of the utter importance of the electoral process and encouraged us to register to vote immediately after the ceremony. That is exactly what I did, going down one floor in the USCIS building to sign up, and now I am officially registered to vote, which was a big part of this; the desire to participate more in the political process here, however dysfunctional it seems right now. 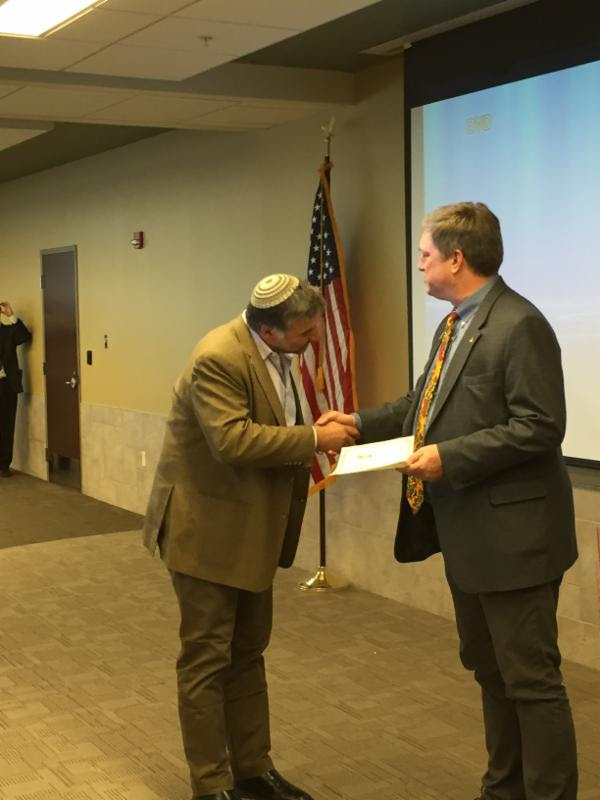 I am very grateful for all the support in this journey from friends and from Bonai Shalom and was moved by the presence of supportive people at the swearing in ceremony. Many have asked me if I have given up my British passport. Absolutely not! I am a dual citizen and am not sure that I would have gone through this without the possibility of maintaining my relationship to England and Europe, to the places where I was raised where my parents and extended family still live.

The part of the oath that declares that I renounce my allegiance to any foreign sovereignty was hard and confusing to me. I was very aware of my privilege coming from a place and family where I have always had abundant opportunities and freedoms and have certainly not fled oppression or tyranny. I can return to England whenever I choose, which is not true for some of my fellow new citizens for whom this new identity has a power that I can only imagine. That said, it seems to be a frightening paradigm that suggests that we cannot have loyalty to more than one country, which does not hold true for me in my own vision of global partnership to redeem our world. I still have much to process about this experience, but feel proud, grateful and relieved to have completed my own personal path to US Citizenship!

Marc is a native of London, England where he was an actor and practitioner of complimentary medicine before training as a rabbi in London, Jerusalem and Los Angeles. He was ordained at the Ziegler School of Rabbinical Studies at the American Jewish University in 2004 and has been the the spiritual leader at Bonai Shalom in Boulder ever since. Marc was a close student of Rabbi Zalman Schechter Shalomi and received an additional smicha (rabbinic ordination) from him in 2014, just two months before he died. He has been the host and narrator of two documentary films shown on PBS; A Fire in the Forest: In Search of the Baal Shem Tov and Treasure under the Bridge: Pilgrimage to the Hasidic Masters of Ukraine. Marc is a graduate of the Institute of Jewish Spirituality, a fellow of Rabbis Without Borders, has traveled to Ghana in a rabbinic delegation with American Jewish World Service and co-chair of the Rabbinical Council and national board member of Hazon, which strives to create more sustainable Jewish communities. In 2015, Marc was among a group of 12 faith leaders honored at The White House as “Champions of Change” for work on the climate. Marc is a proud member of Beit Izim, Boulder’s Jewish goat milking co-op.
Previous Week in Review: December 18th, 2015
Next JFS CEO Yana Vishnitsky to Retire in 2017 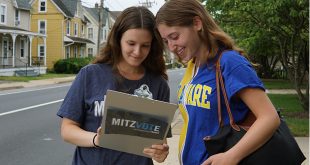