Camper is First to Crowdfund Way to Camp Inc.

Staff April 26, 2015 News Comments Off on Camper is First to Crowdfund Way to Camp Inc.

The concept of “Jewish identity” calls to mind a number of associations: passion, belief, family, tradition, education, ethics, and especially community. Extending back to the origins of the Jewish people, it’s been expected that when overarching societal constructs fail a Jewish individual, it is the community’s responsibility to step in for support. It is this tradition that San Francisco’s Cash Ashkinos knew he could draw upon when he and his family didn’t have the extra funds to send him to Camp Inc., the premier Jewish entrepreneurial summer camp program.

Within 27 days of beginning his Indiegogo crowdfunding campaign, Cash was able to raise the $2,500 he needed. Now he has his sights set on greater goals for other kids like him. Cash has decided to help other would-be campers in the predicament he once was in, by increasing his fundraising goal from $2,500 to $12,500, an amount that would sponsor the attendance of ten other campers.

Jewish summer camps have a history that goes back generations. Parents, grandparents, and great grandparents remember leaving their children for weeks to bunk with their friends in cabins, swim and kayak in lakes, join in on fireside sing-alongs, and attend inter-camp dances, where they formed close friendships and created memories to last a lifetime.

Nowadays, though, some of these camps have evolved as preparatory institutions, known for their “specialties” — meaning that Jewish children can enroll to learn specific skills that will prepare them for success later in life.

Camp Inc. is a perfect example, as it “is this incredible mix of traditional Jewish overnight camp and a top-notch business program,” notes Josh Pierce, Chief Camp Officer. “Teenagers come from all over the world to learn how to take an idea and turn it into reality.”

When Josh Pierce visited Cash’s Hebrew school to introduce the students to the camp’s programs, Cash was unable to contain his excitement. As a bright child, he was full of innovative ideas and motivation but lacked the practical knowledge needed to implement them. He understood the value of Camp Inc.’s program would be crucial to his professional development and asked Pierce to contact his mother, who shared his enthusiasm but knew the financial barriers would preclude her from enrolling her son.

Pierce suggested that neither Cash nor his mother admit defeat and instead, he recommended avenues in addition to that of scholarships and other such programs — he suggested using a crowdfunding website for Cash to achieve his dream of attending Camp Inc. in the summer of 2015.

Such advice transformed Cash into an early entrepreneur. He joined up with Indiegogo Life, a site meant to aid startup companies in funding their ventures and ideas through the help of their own communities. Cash built a page that gives a detailed account of his aspirations as an entrepreneur, as well as his struggles as an adolescent trying to communicate his ideas and see them to fruition. Over short videos and a written story, Cash shares his conviction that immersing himself in a Jewish community of enthusiastic peers and leaders would lead to a more stable sense of self and a motivational grasp of the entire business process — from the brainstorming stage to that of real-life application.

On June 18, 2015, Camp Inc. will welcome Cash Ashkinos and other like-minded, enthusiastic youths to its summer session. Camp Inc.’s prestigious overnight summer camp program is designed to promote Jewish values, social and leadership skills, and professional strategies that will prepare its campers for success in both their personal lives and professional careers. For more information on Camp Inc., visit http://www.campinc.com. To view and further support Cash’s campaign, visit his Indiegogo page at https://life.indiegogo.com/fundraisers/help-me-send-other-kids-to-summer-camp/.

They call me "NewsHound IV," because I'm a clever Finnegan, sniffing out stories all over the Boulder area. I love Jewish holidays because the food is GREAT, especially the brisket. Well all the food. I was a rescue pup and glad to be on the scent!
Previous Interview with Rabbi Mark Glickman, Honoree at Upcoming Shir Aviv Event
Next JEWISHcolorado Opens Box for Nepal Relief 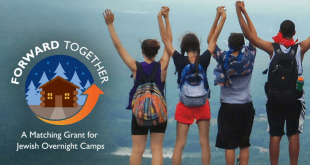