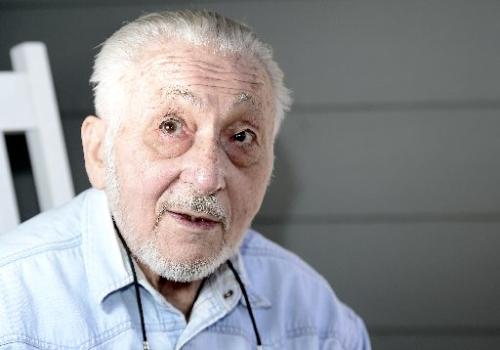 A New Program Created to Satisfy the Hunger for Holocaust Education

Kathryn Bernheimer April 2, 2015 Arts & Culture Comments Off on A New Program Created to Satisfy the Hunger for Holocaust Education

Professor Paul Shankman has spent the last 40 years teaching the Holocaust at CU. When he learned that Hillel at CU decided to discontinue its annual Holocaust Awareness Week, organized and run by students for the CU and larger Boulder community for many years, he felt it was a great loss. He quickly determined to fill the void, despite the lack of a budget or any partners at CU. He did, however, find support from Menorah: Arts, Culture and Education at the Boulder JCC.

The Boulder Jewish Film Festival offered to sponsor a free screening of “Run Boy Run,” which sold out both its screenings in March and which enjoyed great audience enthusiasm despite the harrowing nature of the drama. Based on a true story, the award-winning film follows a young boy’s struggle to survive the Holocaust on his own in the hostile Polish countryside. A hit at Jewish film festival across the country, it was named best drama this week at the recently concluded Los Angeles Jewish Film Festival.

Four experienced local speakers were invited to tell their unique stories of survival. Two of the talks will be held during Shankman’s class, where there are ample extra seats for guests. The class of 90 students, which is highly rated by students, is one of the largest upper-level division classes at CU, which substantiates his opinion that students of all backgrounds and majors are indeed in the subject.

The new series for students and community members, renamed as Holocaust Remembrance Week, takes place April 14-17 at CU. All events are free and open to the public, and no reservations are required. Questions should be directed to paul.shankman@colorado.edu.

Walter Plywaski: “From Hidden Child to Hero of Poland”

Beginning at age 10, Walter survived overcrowding, disease, and starvation in the Lodz ghetto, before he and his family were deported to Nazi concentration camps, including Auschwitz and Dachau. A popular and frequent speaker, Walter was recently awarded the Polish Knight’s Cross of Merit, “in recognition of outstanding services to the Polish-American community in disseminating historical awareness on Polish and Jewish fates in the occupied Poland.”

This program takes place during Professor Paul Shankman’s class, which has ample seats for guests.

Maria Krenz: “Made in Hungary: A Life Forged by History”

Maria Krenz was born during a bombing raid in Budapest, Hungary. Her talk will detail her family’s Holocaust experience and its impact on her life. She places her story in the context of the shocking chapter of the Holocaust in Hungary. Maria is the author of “Made in Hungary: A Life Forged by History,” which melds history and memoir.  She shares her poignant life story as a Jew and discusses the power of hate as well as the evolution of democracy in Hungary.

Barbara Steinmetz:  “Sosua: My Safe Haven in the Dominican Republic”

Barbara shares her remarkable story of a childhood spent in an unlikely refuge from the Holocaust, because her parents had the wisdom and courage to escape annihilation at the hands of the Nazis. While no paradise, the Dominican Republic did provide safety for the family, creating a tiny community of refugees. Barbara recounts her travails as well as a recent trip back to Sosua with her family that jogged memories of hope and desperation.

This program takes place during Professor Paul Shankman’s class, which has ample seats for guests.

Back by popular demand after two sold-out screenings at the Boulder Jewish Film Festival, this harrowing and superbly acted story of a young boy’s battle for survival is based on the best-selling novel by Uri Orlev. This acclaimed drama tells the true story of Jurek, a nine-year-old who endures the nightmare of the Holocaust alone in the forests of Poland. There will be a discussion after the film with Paul Shankman.

Peter Behrendt: “A Childhood Spent in a Berlin Basement”

Peter is one of the very rare three-generation families that survived by living underground in Berlin. Huddled in a tiny cellar for five years, they survived by a combination of sheer luck and help from Christian friends who risked their lives to hide the family. Peter’s father created oil paintings by candle light, which these friends sold to buy food to keep the family alive. At one point the family was buried for five days when bombs destroyed the house in which they were hiding.

Kathryn has spent her professional life writing about, teaching, and presenting the arts. Founding Director of the Boulder Jewish Film Festival, Kathryn was Director of Menorah and ACE at the Boulder JCC from 2003 through August, 2019. The former film and theater critic for the Boulder Daily Camera, Kathryn is the author of "The Fifty Greatest Jewish Movies" and "The Fifty Funniest Films of All Time." kathryn.bernheimer@gmail.com
Previous Seven Steps Towards Strategic Corporate Philanthropy
Next Put a Tomato on Your Seder Plate