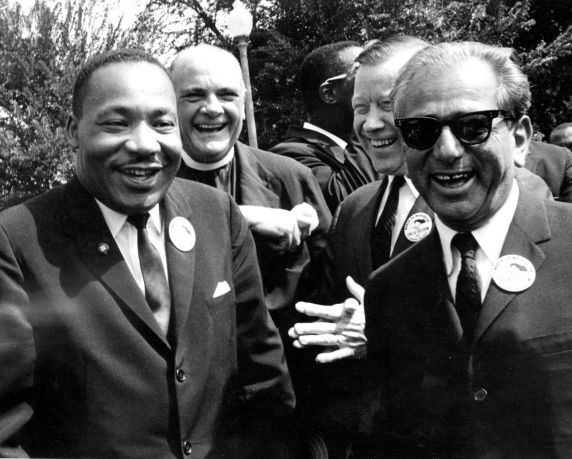 As if there not enough Jewish holidays already, I suggest adding another. Martin Luther King was not Jewish, but many of his greatest friends and supporters were, especially Rabbi  Joachim Prinz.  If there is such a thing as a Jewish neshama, or soul, he had one. He changed our world for the better for all minorities. He fought all hate, all prejudice. We fought with him. He fought for us.

And so the Boulder Jewish Film Festival is presenting – on the erev of MLK Day of course – a special screening to honor the fallen American hero.

At the Boedecker Theater In Berlin in the 1930’s, the civil rights of Jews were systematically stripped away. A young rabbi refused to be silent. His name was Joachim Prinz and he saved many lives by encouraging Jews to emigrate from Germany. Expelled from Germany in 1937, Prinz arrived in the United States, the land where democracy had supposedly triumphed over bigotry and hatred. Here, he witnessed racism against African Americans and realized the American ideal was not yet a reality. Prinz became a leader of the civil rights movement, working to organize the 1963 March on Washington, declaring, “bigotry and hatred are not the most urgent problem. The most urgent, the most disgraceful, the most shameful and the most tragic problem is silence.” Moments later, Martin Luther King, Jr. delivered his “I Have A Dream” speech,” and the fight for freedom was on, rabbi and preacher walking hand in hand.

Kathryn has spent her professional life writing about, teaching, and presenting the arts. Founding Director of the Boulder Jewish Film Festival, Kathryn was Director of Menorah and ACE at the Boulder JCC from 2003 through August, 2019. The former film and theater critic for the Boulder Daily Camera, Kathryn is the author of "The Fifty Greatest Jewish Movies" and "The Fifty Funniest Films of All Time." kathryn.bernheimer@gmail.com
Previous Reincarnation and Resurrection: Are They Jewish?
Next Week in Review: January 16th, 2015