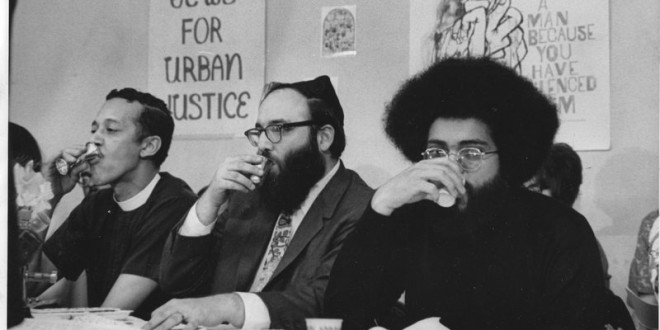 The Program in Jewish Studies, University Libraries, and cosponsors are pleased to present the second biannual Embodied Judaism Symposium, Freedom Seder: American Judaism and Social Justice on Thursday, November 12 from 4:30 pm – 6:30 pm on the CU-Boulder campus. The Embodied Judaism initiative explores the role of the body in Jewish life through public gatherings and multimedia exhibits aimed at academic and nonacademic audiences. This year’s program, which includes a symposium and exhibit, engages materials in the Post-Holocaust American Judaism Archive held at CU-Boulder, and explores American political activism and religious practice in the wake of the 1969 Freedom Seder. RSVPs are required and can be made via email to CUJewishStudies@colorado.edu.

In April 1969, on the first anniversary of the assassination of Martin Luther King, Jr., Jewish and African-American activists came together in Washington, D.C. to share a meal in solidarity, an event which came to be known as the Freedom Seder. Based on a text written by Arthur Waskow, this event would exert a long-lasting influence on American life, generating considerable controversy while also sparking new forms of political activism and religious practice across the ideological spectrum. The content, context, and legacy of this event will form the focus of this Embodied Judaism symposium.

This year’s symposium will feature leading scholars and practitioners from across North America. Each will present on a different aspect of the Freedom Seder and its legacy and then lead the audience in an embodied experience. Rabbi Arthur Waskow, one of the central figures behind the original Freedom Seder and the current director of the Shalom Center, will be in attendance and will reflect on the 1969 Freedom Seder and twenty-first century struggles for social justice.

Rabbi Rachel Barenblat, co-chair of the board of directors of ALEPH: The Alliance for Jewish Renewal and writer of the popular blog Velveteen Rabbi, will speak about how the Freedom Seder used the particularistic Jewish language and frametale of the seder in order to express a vision of justice and a world redeemed, as well as the impact of the 1969 event on contemporary feminist seders.

Adam Bradley, Associate Professor of English and Founding Director of the Laboratory for Race and Popular Culture at CU-Boulder, will explore how the 1969 Freedom Seder’s core principles of grassroots social action, prophetic vision, and cross-racial collaboration are linked to the burgeoning hip hop culture of the mid-1970s.

Riv-Ellen Prell, Professor of American Studies at the University of Minnesota, will address the cultural politics of the Freedom Seder and how the event challenged particularist understandings of Jewish ritual, recasting Jewishness as a radical platform for building bridges across race and religion. Professor Prell will be in-residence at CU-Boulder serving as the inaugural 2015 Jim and Diane Shneer Fellow in Post-Holocaust American Judaism.

Special guest Eve Ilsen will open this year’s symposium with a welcoming song.

In addition to the symposium, there will be a walk-through wall exhibit that explores the Freedom Seder and its legacy, along with the storied career of Rabbi Waskow. The exhibit will be located on the 2nd floor of Norlin Library on the CU-Boulder campus. It opens to the public in early November and will be formally launched at the symposium. It is available for viewing during regular library hours, which can be found at ucblibraries.colorado.edu/hours/index.cfm.

The symposium and exhibit engage materials housed in the Post-Holocaust American Judaism Archive, a collaborative project between the Libraries and CU-Boulder’s Program in Jewish Studies. Anchored by collections such as the Mazal Holocaust Collection and the papers of the Jewish Renewal Movement, including those of Rabbi Waskow, this archive focuses on materials examining Judaism and the Jewish experience through the lens of religious, cultural and social movements in America from the late 1940s to the present.

The Embodied Judaism Symposium is free and open to the public. However, space is limited, and RSVPs are required. Please email CUJewishStudies@colorado.edu or call 303.492.7143 to reserve a spot.

For more information about this event, please visit Colorado.edu/JewishStudies or call 303.492.7143.