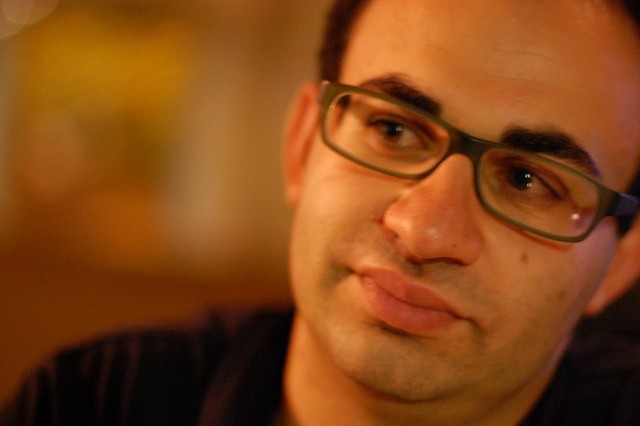 When Gary Shteyngart’s “The Russian Debutante’s Handbook” was published in 2002, a full-fledged literary subgenre was born.

Professor Sasha Senderovich has been at the scholarly forefront of this outburst of creative literary energy since its inception, and even before it became a phenomenon.

According to his own article published in Tablet Magazine in June (Russian Jewish American Lit Goes Boom!), this year alone a half dozen new books have been published in English by Soviet-born émigré Jewish writers.

Professor Senderovich, himself a Russian-born emigre, joined the faculty of CU’s Program in Jewish Studies in 2012, having taught Russian and East European Studies at Tufts after obtaining his Ph.D. from Harvard. His current CU courses include Jewish Literature: Jews Coming of Age, and Global Secular Jewish Societies.

High on the list of this new cross-cultural Jewish writers club, which Shteyngart still dominates, is David Bezmozgis, the subject of Thursday’s night’s book-club style discussion at the Boulder JCC. Part of Menorah’s Scholars Series: CU at the J, the 7:00 pm talk will focus on Bezmozgis’s short story, “Roman Berman, Massage Therapist,” from his 2004 collection, “Natasha and Other Stories.” (The story has been emailed to registered participants to read in advance, and will be sent to those who register.) Bezmozgis is one of the writers in the cohort of Soviet-born Jewish writers who moved from the Soviet Union and have been writing, in English, for the past decade. In 2010, he was named by The New Yorker magazine as one of “20 under 40” — one of the 20 writers then under the age of 40 to watch as the big talents of the current decade. Bezmozgis new novel has just been published, The Betrayers, in which the main protagonist is loosely based on Natan Sharansky. Professor Senderovich recently published his review in the New Republic: http://www.newrepublic.com/article/119501/david-bezmozgiss-betrayers-review.

Kathryn has spent her professional life writing about, teaching, and presenting the arts. Founding Director of the Boulder Jewish Film Festival, Kathryn was Director of Menorah and ACE at the Boulder JCC from 2003 through August, 2019. The former film and theater critic for the Boulder Daily Camera, Kathryn is the author of "The Fifty Greatest Jewish Movies" and "The Fifty Funniest Films of All Time." kathryn.bernheimer@gmail.com
Previous Colorado Hebrew Chorale and Longmont Chorale Performing Together
Next YK Almost Upon Us – Don’t Miss Out