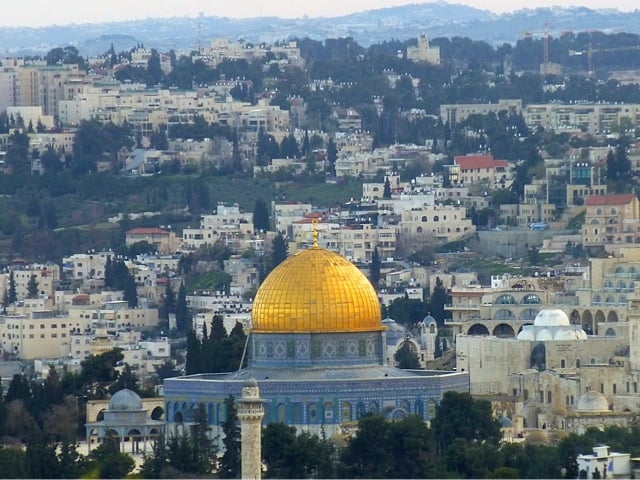 Dome of the Rock.

In Search of Jewishness

Sandi Butchkiss May 4, 2014 Guests and Blogs Comments Off on In Search of Jewishness

My husband was born to Jewish parents in Sydney, Australia. Like all Jewish boys, he was circumcised. At the age of twelve he went off to chader and when the time came, he was able to sing in Hebrew at his bar mitzvah. That was about it. After he “became a man” he threw off his tallis and yarmulke and returned to his real interests; football and surfing. And he never looked back. Thirty years later, when we met, I had to ask him “Are you Jewish?” No one we knew thought he was. Even close friends were surprised when they learned of his Jewish roots. Not being a religious person, I don’t belong to a temple and haven’t heard the shofar blow since my grandparents were alive. As a food writer for 25 years, I have happily dined on lobster tails, spare ribs and spaghetti a la vongele. But I never stopped feeling Jewish. So, after my mother died I took over and made a Seder every year wherever I lived, first in Manhattan, then Malibu, then in London and later in Hong Kong, complete with haroset, matzoh ball soup, brisket and gefilte fish.

In Hong Kong Cliff would attend these festive, traditional meals, but that was no clue, as the Seder table consisted of two token New York Jews, a Brit, one Chinese, a Canadian Roman Catholic, two Eurasians and a Thai, all clutching their hagadahs. So, last year, when he was about to celebrate a really big birthday, I knew the perfect present – his first trip to Israel. And so it came to pass that on March 3rd we made the pilgrimage. My husband was excited but slightly apprehensive. I am not sure what he expected, but I have an inkling it would have been close to a real life version of Fiddler on the Roof. Or perhaps that the streets would be filled with circles of handholding locals doing the horah and singling Havana Gila. Both, he would discover, were a far cry from the modern metropolises that is Israel today.

I had organized for the most comprehensive itinerary possible, and feel certain only Netanyahu has seen this much of his country. In 17 days we visited Tel Aviv, walked to Jaffa, explored Jerusalem and the Old City, stuck little paper wishes into the Western Wall, marveled at ancient synagogues in Safed, went to Haifa, Acre, the verdant Golan Heights which is now the Napa Valley of Israel, the Sea of Galilee, walked through the extensive Roman ruins in Caesarea, visited a number of world-class museums, drove out to the desert to Ben Gurion’s home and grave, enjoyed a lecture in Independence Hall, went down into grottoes, trekked into King Solomon’s copper mines, floated in the Dead Sea, swam in the Red Sea, slept in a kibbutz, shared a delicious lunch with Bedouins in their tent in the Negev, walked around Masada, consumed a great deal of hummus, tahini and olives and met and talked with many young soldiers guarding all the borders touching this tiny country the size of New Jersey: Lebanon, Syria, Jordan and Egypt.

We carefully inspected the actual Dead Sea Scrolls, stunningly displayed in an extraordinary building constructed for the sole purpose of exhibiting these precious documents. But it was the award-winning Holocaust Museum with its soaring roof and masses of memorabilia from the various concentration camps and most affected European cities, which took our breath away. We did see numbers of Arabs along with scores of Hasidim, especially in the Old City of Jerusalem. However the average people with whom we came into contact, riding their bikes, jogging along the Mediterranean, eating in the restaurants and shopping in the malls, were not living on chicken soup and chopped liver or necessarily attending synagogues or poring over the torah day and night. They didn’t even sprinkle their conversation with Yiddishisms, as I am prone to do. My three decades of trying to instill some Jewishness in my husband didn’t make a dent. In fact, he tended to think I was too partial to both the country and its people. But after just 17 days of intensive doses of Jewish biblical past and thriving present, the Israeli people’s energy, art and history, their food and wine, and incredible achievements, on our last day over drinks in the lobby of the famed century old and still gorgeous King David Hotel, he confided, “if I were 30 years younger I would move here in a heartbeat!!” Oy, was this comment a mitzvah to my ears. So without dancing one horah or speaking Hebrew, he got it – the meaning of Jewishness. And without my saying a word.