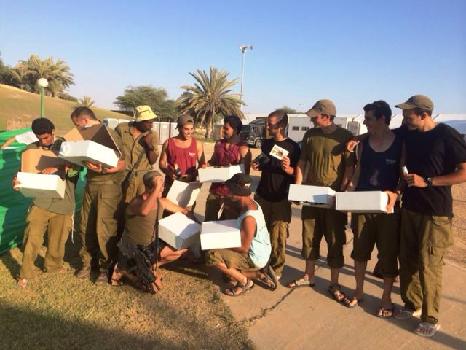 50 Americans Help to Breathe Life Back into Israel

Businesses in Israel’s south have taken a major knock since the start of Operation Protective Edge, now in its fourth week. Not only are tourists not visiting, but the locals are also not venturing into the shops for anything other than the essentials.

On the spur of the moment, leaders from Jewish National Fund (JNF) decided to arrange a solidarity mission to Israel to support the economy while simultaneously helping the soldiers and children near Gaza.

JNF’s L’Chaim Solidarity Mission was put together in a matter of days. Between July 16, when they announced the trip, and July 27, when they arrived, they managed to enlist more than 50 volunteers – all of whom paid their own way – to join the mission JNF called “Breathing life back into Israel.”

About a week and a half ago, a group of our leadership and volunteers said, ‘Let’s go to Israel,’ and in 24 hours, we had an email out to our list,” said JNF CEO Russell F. Robinson. “We recruited over 50 people – doctors, lawyers, business people – who put down things in their lives and said, ‘You know what? There’s no place that we have to be besides Israel.’

“And this week, we came, we saw and we shared. We wanted to be here and show solidarity,” he said.

Packing boxes near the beach

The five-day mission, which saw the participants visiting shops, malls, army bases and towns near Gaza, culminated in Tel Aviv where they packed the supplies they had bought in boxes for the soldiers. They were joined by nearly 50 Tel Aviv volunteers from Nefesh B’Nefesh and the OneDay social volunteering organization, as well as others who joined from the hotels in the area or off the beach.

The Carlton Hotel hosted the event, which took place on its patio outside, and provided refreshments for the volunteers throughout the afternoon. Undeterred by a Red Alert siren, which stopped packing for about 15 minutes, the volunteers managed to pack and seal 5,000 boxes to be delivered to the army bases situated along the border of Gaza. Products included thousands of tubes of foot cream donated by a Druze with a business in the Negev as well as snacks, shampoo, torches, and much more.

The products that were boxed are those we bought in Ofakim, a small town about 17 miles from Gaza,” said Robinson. “We went to over 15 small stores in Ofakim. It would’ve been a lot easier to buy everything here in Tel Aviv and maybe we would have even saved a dollar. But it wasn’t about saving money. It was about showing the people of Ofakim that we were there to help their economy as well.”

Ofakim has come under heavy fire over the past few weeks with as many as five rockets at one time being fired into or near the town. The Iron Dome Missile Defense System has intercepted all rockets that were headed towards populated areas.

No hesitation from the JNF volunteers

Sami Groff, an environmental attorney from New York, was one of the volunteers who dropped everything to join the mission. Like other Jews in the US, she had been watching very closely what was going on in Israel.

It was hard to get any work done because we were watching the news to see what was happening, and constantly looking on Facebook trying to get updates,” she said. “You feel so frustrated that you can’t do anything. You’re just watching these terrible things unfold and there’s nothing you can do about it.”

“Someone posted a blog on Facebook saying what they needed was people to come here and to help, to go into shelters and meet with the kids and just come and do things. A few minutes after I closed the post and tried to get back to work, an e-mail popped up on my screen from JNF with the subject line: ‘What can you do?’ The third point was ‘Join us on a solidarity mission’ and I felt this was it; I just had to do it. So I called them right away and signed up.”

In the line of fire visiting the south

The first stop in the south was the city of Be’er Sheva where they bought books and toys and other goods for children. Next, they visited Sderot to spend time with kids in JNF’s Indoor Recreation Center.

As far as the story has been told to me,” Groff said, “back in 2007 a JNF representative visiting Sderot noticed there were no kids playing outside and he asked where all the children were. He was told that it wasn’t safe for them to play outside so JNF came up with the idea of building this shelter, a massive, reinforced structure built as an indoor playground, where it’s safe for the kids to play.

“We were told that one of the things they didn’t have in the playground was a good library so we provided a library of books in Hebrew for all different ages. We brought four boxes of books and a couple of carpets and pillows from Be’er Sheva to make a small reading corner for them,” she said.

The group experienced many significant moments during their time in Israel. They drove far south to the towns of Shlomit and Naveh near the Gazan and Egyptian borders, where residents have only seven to 15 seconds to get to safety when a rocket comes their way.

In Shlomit, the group helped out in a day care center working with the children to pack more boxes for Israeli soldiers, and painting the walls of the center. There, Groff connected with a young girl of 11 and the two of them painted while talking.

She told me about her experiences and how scared she was, and how her brother was serving in the army in Gaza,” says Groff. “It was a good opportunity for her to get things she was stressing about off her chest. She lived on a different yishuv (settlement) nearby and she didn’t have a safe room in her house. She accompanies her aunt to work every day during the summer so she can be somewhere safe. While we were talking, a red alert sounded and we had eight seconds to get the children to the bomb shelter. That whole experience was very meaningful for me.”

In Naveh, they met with people who don’t have safe rooms in their homes and have to run to free-standing shelters outside which takes more time to get to than they have. Recently, JNF donated money to deliver 30 mobile bomb shelters to the people there.

JNF is not here because we’re an emergency 911 organization,” says Robinson. “We’ve been working here in the Negev every day for years. We’ve been in Be’er Sheva and the Arava and Yerucham, Dimona and Sderot and Ofakim. For us, it’s a matter of being part of the family. We were here yesterday, we’re here today and we’ll be here tomorrow. It’s not a reaction of doing something spontaneous for people we don’t know. These are our people, our extended family.”

Calling Colorado home since 2004, I am honored to work for the Jewish National Fund as the Senior Campaign Executive for the Mountain States Region. I work with the Mountain State communities, connecting with individuals, organizations, and community leaders who share Jewish National Fund’s passion and goals.
Previous Jake Hamerslough Bar Mitzvah
Next Summer 2014 Diary of an Israeli – Part 6