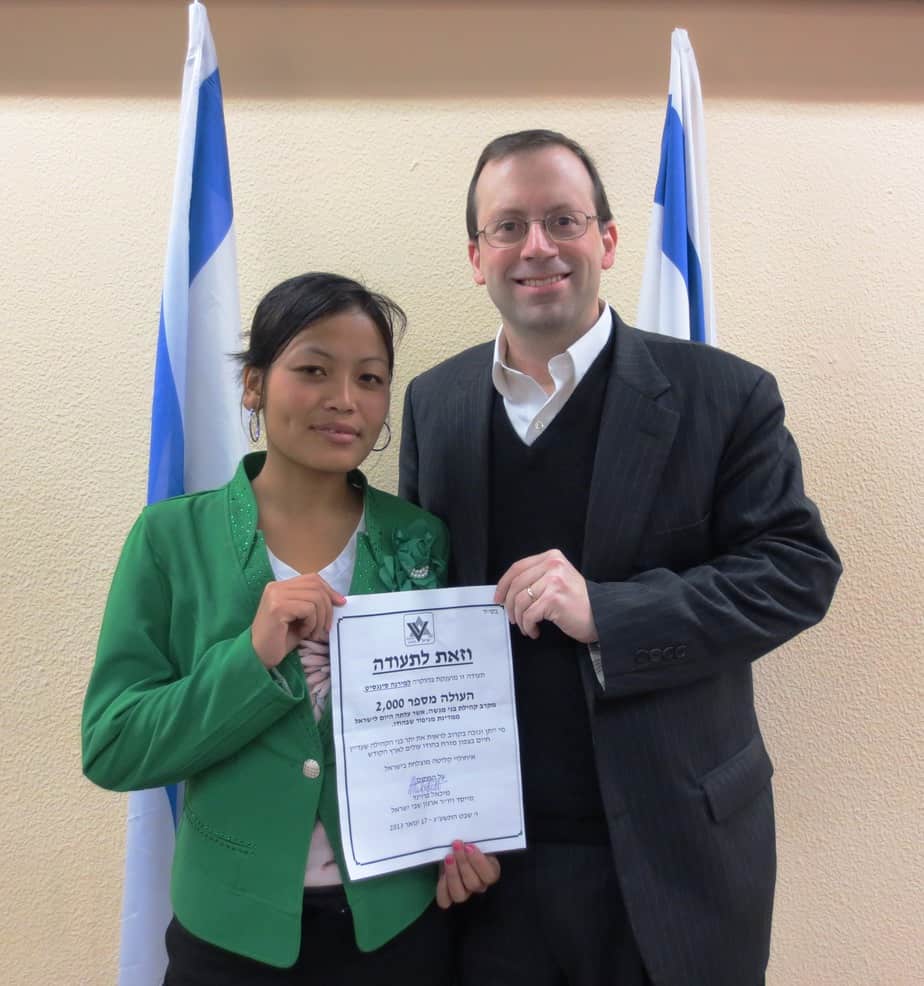 Tel Aviv, January 17, 2013 – Mirna Singsit, 18, from the state of Manipur in northeast India, is the 2,000th Bnei Menashe Oleh to make aliyah to Israel. She arrived in Israel today along with 53 other Bnei Menashe community members from Manipur on a group flight facilitated by the Shavei Israel organization. Immediately after landing at Ben Gurion Airport in Tel Aviv, Singsit received a special certificate from Shavei Israel Chairman Michael Freund, officially recognizing her as the 2,000th Bnei Menashe member to reach the Jewish homeland.

Mirna Singsit is making aliyah with both of her parents and three brothers. She left behind her grandparent, four uncles and two aunts in Manipur to fulfill her lifelong dream of living in Israel. Singsit was a student at Churachandpur University in Manipur studying for a Bachelor’s Degree in Political Science, which she hopes to continue in Israel and eventually become a school teacher.

“I’m so very happy right now I can hardly express it in words. Not only has this been my dream since I was born, but it has been my peoples’ dream for thousands of years and now it has finally come true,” said Singsit upon her emotional arrival in Israel. “I still don’t know where my parents are planning to move after our time in the absorption center, but I personally dream about living in Jerusalem, the Holiest place on Earth, and hope to move there sometime in the very near future.”

“This is an incredibly emotional day for all of us,” said Shavei Israel Chairman Michael Freund as he welcomed Singsit and her family to Israel. “The arrival of the 2000th Bnei Menashe immigrant is a milestone for the community and for the Jewish state. After 27 centuries of exile, the lost tribe of Bnei Menashe is truly coming home. But we will not rest until all the remaining Bnei Menashe still in India are able to make aliyah as well,” Freund added.

Last October, the Israeli cabinet passed an historic and unanimous decision which formally restarted the Bnei Menashe aliyah after a five year hiatus, and granted Shavei Israel permission to bring an initial group of 275 Bnei Menashe to Israel. The immigrants came on five flights over the past month, all of which were facilitated by Shavei Israel and sponsored by Jewish and Christian philanthropists, foremost among them the ICEJ.

Upon arrival, the Bnei Menashe are taken to Shavei Israel’s absorption center in Givat Haviva where they will reside during their initial months in the country. Subsequently, they will move to the cities of Acre and Migdal Haemek in the north of Israel. The new arrivals join the 1,725 Bnei Menashe who are already living in the Jewish state, and have become an integral part of Israeli society. Before this most recent aliyah, the last Bnei Menashe flights to arrive in Israel were in 2007 carrying 230 Olim, and in 2006 carrying 219.

The Bnei Menashe (Hebrew for “sons of Manasseh”) claim descent from one of the Ten Lost Tribes of Israel, who were sent into exile by the Assyrian Empire more than 27 centuries ago. They live in India’s northeastern border states of Manipur and Mizoram. Their ancestors wandered through Central Asia and the Far East for centuries, before settling in what is now northeastern India, along the border with Burma and Bangladesh. Throughout their exile, the Bnei Menashe nonetheless continued to practice Judaism just as their ancestors did, including observing the Sabbath, keeping kosher, celebrating the festivals and following the laws of family purity. And they continued to nourish the dream of one day returning to the land of their ancestors, the Land of Israel.

The Bnei Menashe who currently live in Israel reside in the cities of Jerusalem, Ma’alot, Karmiel, Nitzan and Kiryat Arba. Around 7,000 still remain in India, waiting for the day when they too will be able to return to Israel and the Jewish people. Shavei Israel is the only organization that is working on behalf of the Bnei Menashe.

Shavei Israel is a non-profit organization founded by Michael Freund, who immigrated to Israel from the United States, with the aim of strengthening ties with the descendants of Jews around the world. The organization is currently active in nine countries and provides assistance to a variety of different communities such as the “Bnei Menashe” of India, the “Bnei Anousim” in Spain, Portugal and South America, the “Subbotnik Jews” of Russia, the Jewish community of Kaifeng in China, the “Hidden Jews” of Poland from the Holocaust era and others. For more information visit: www.shavei.org.

They call me "NewsHound IV," because I'm a clever Finnegan, sniffing out stories all over the Boulder area. I love Jewish holidays because the food is GREAT, especially the brisket. Well all the food. I was a rescue pup and glad to be on the scent!
Previous Women’s Torah Skill Builder’s Class
Next Visiting Scholar at Chabad for One Shabbat, One World