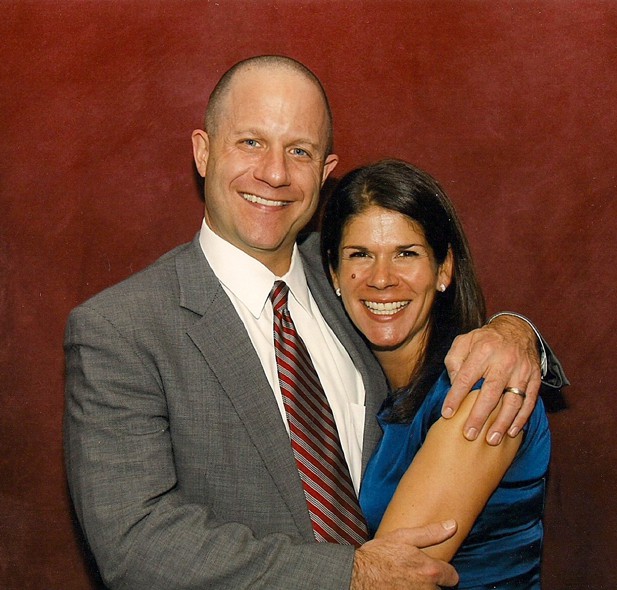 Matt and Julie Rich, who are being honored as Rising Stars at the Boulder JCC’s Reflections gala Saturday night, met at a Jewish sleep-away camp when they were 12, and both attended the same camp for ten years. Years later, they ran into each other by chance as adults in Manhattan, where he worked in finance and she worked in advertising. Matt needed a date for a formal business affair and asked Julie to stand in.

“That was the first time he saw me dressed up, and not in a t-shirt and shorts,” Julie surmises the reason he then asked her on a real date. They married, moved to Bedford and started a family.

Ten years ago, the New York lifestyle was getting old, with Matt commuting three hours a day. Matt had family living in Boulder, their daughter Abby was a year old, and the couple decided to make a “quality of life” change.

We thought we would try Boulder and if we didn’t like it, we’d move on,” Julie said. “Of course, we loved it.”

Abby, now 11, and Samantha, now 9, attended PAL and the Boulder JCC Preschool, which is where Julie began to make friends. One day she forgot that it was a holiday and arrived at the JCC to find a single car in the empty parking lot. The car belonged to another mother, Lynette Zickerman, who had also forgotten that the JCC was closed. Thus began a great friendship, the first of many to follow.

While Matt and Julie enjoy celebrating the holidays and Jewish family traditions at home, the JCC, they say, is “without a doubt our primary Jewish connection.”

“I had a hard time connecting when I moved here until I came to the JCC,” Julie remembers. As her daughters started school, Julie had more time to volunteer, and she began to work on Reflections, taking on projects such as the silent auction, the tribute book, and the invitations. She also coordinated the JCC’s booth at the Boulder Jewish Festival, and has worked on the last two JCC Taste of Boulder fundraisers.

Matt joined the JCC board three years ago as treasurer.

I knew I wanted to get involved in a community organization, and the JCC was such a good fit because it had been so welcoming to us when we moved here. The people on the board who invited me, Susan Rona and Adam Sirkus, were people I respected and admired.”

Matt adds that Erik Bernstein, who is also being honored at Reflections as a Bright Star, has been a valuable mentor.

He has brought great strategic vision to the board, and he’s given me good guidance and been a good friend. He understands the history of the JCC and the bigger picture. The time and effort he’s put into the JCC is phenomenal. Erik has been a rock star.”

Julie credits JCC Board President Susan Rona with getting her engaged as a volunteer for the JCC.

She had just moved here and was so energetic and involved. We just clicked. She needed some help and we found we worked well together. I also realized something exciting was happening that I could be part of, and that motivated me too.”

“We feel it is important to give back to the community and we are fortunate that we are able to volunteer, as people and as parents,” Julie adds. “We want to teach our kids that.”

Julie says she is looking forward to the expanded programming that will come with the new building. “There is tremendous excitement in a new building. We will be in the new JCC with our kids and be able to say we built these walls.”

Matt adds that the new JCC will provide much needed space for the community and will attract a more geographically and demographically diverse audience with events and activities for all ages.

As Reflections draws near, Julie says that she and Matt are truly touched to be honored, especially along with Bright Star Erik Bernstein, and they look forward to “a wonderful evening with friends and family – and our JCC friends and family.”

Kathryn has spent her professional life writing about, teaching, and presenting the arts. Founding Director of the Boulder Jewish Film Festival, Kathryn was Director of Menorah and ACE at the Boulder JCC from 2003 through August, 2019. The former film and theater critic for the Boulder Daily Camera, Kathryn is the author of "The Fifty Greatest Jewish Movies" and "The Fifty Funniest Films of All Time." kathryn.bernheimer@gmail.com
Previous Aish Kodesh Is Giving Away Our Annual Dinner
Next Four Days of Film with BIFF