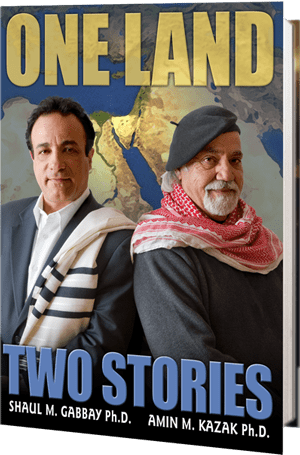 Kathryn Bernheimer November 15, 2012 Arts & Culture Comments Off on The Israeli and Palestinian Stories Share a Stage Shaul Gabbay and Amin Kazak have a lot in common. They are both professors at DU. They were born close to each other in both time and place. They are passionate about their people, their history and their heritage. They are good friends who teach side by side and now are co-authors of a book.

But they are on opposite sides of a divide that has split the Middle East for generations.

On Sunday, December 2, Professors Gabbay and Kazak come to the Boulder JCC at 7:00 pm to share their conflicting stories, which they recently published as side-by-side accounts in “One Land Two Stories.”

The land in the title is Israel. The stories are sometimes referred to as the Palestinian and Israeli narratives. As one would expect, the Israeli Jew and the Palestinian Muslim do not agree. Despite their differing points of view, the two scholars are good friends and respectful colleagues who have worked and taught in close collaboration for many years.

Born in the Holy Land on opposite sides of the Israeli-Palestinian divide, both men’s lives have been directly, tragically, impacted by the on-going conflict in a region desperately needing peaceful resolution. Believing that greater understanding among their peoples is a step toward peace, they decided to write a book delineating their opposing realities that includes their personal stories.

Shaul Gabbay was born and raised in Tel Aviv. The son of Jewish Arab refugees, his coming of age in Israel filled him with a sense of belonging and pride. Educated in Israel, Gabbay’s Ph.D. is from Columbia University, followed by postdoctoral studies at the University of Chicago.

Tickets are $12 in advance (register here); $15 at the door. Books will be available for purchase and signing.

Kathryn has spent her professional life writing about, teaching, and presenting the arts. Founding Director of the Boulder Jewish Film Festival, Kathryn was Director of Menorah and ACE at the Boulder JCC from 2003 through August, 2019. The former film and theater critic for the Boulder Daily Camera, Kathryn is the author of "The Fifty Greatest Jewish Movies" and "The Fifty Funniest Films of All Time." kathryn.bernheimer@gmail.com
Previous Away from Home on Hanukkah?
Next Week in Review: November 16th, 2012