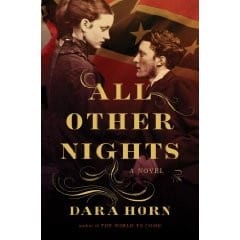 How is tonight different from all other nights? On this night we come together for One JCC Reads. Reclining optional.

Menorah hosts its first community-wide book club event on Sunday, January 29, at 4 pm. This program is also a commemoration of the 150th anniversary of the Civil War and includes a book discussion, a meal and a film. DU Professor Adam Rovner returns to the Boulder JCC to discuss the work of award-winning author Dara Horn and lead a book-club style discussion of her third acclaimed novel, “All Other Nights,” a page-turner set against the backdrop of the Civil War. “All Other Nights,” published in 2009, was selected as New York Times Book Review Editor’s Choice.

Following a light dinner break featuring Civil War era cuisine (vegetarian), audiences can sit back (or recline) to watch the new documentary, “Jewish Soldiers in Blue and Gray.” Professor Ronnie Grinberg from CU’s Program in Jewish Studies will lead a discussion about Jewish life during the Civil War after the screening. Did you know there were 150,00 Jews living in America at the time of the Civil War? And that more Jews lived in Charleston and New Orleans than New York and Philadelphia? Did you know that 10,000 Jews fought in the Civil War? Ever heard of Judah Benjamin, a lawyer and US Senator who was the most prominent and highest ranking Jewish figure in Civil War history, fighting for the Confederacy?

Copies of “All Other Nights” are available at the Boulder JCC Library, HaSifria. But reading Horn’s suspenseful work of historical fiction is not required for participation. The program is for anyone interested in learning more about the role played by Jews as they defended both the Union and the Confederacy during the Civil War, when allegiances split the Jewish community as deeply as the country at large. Some prominent Jewish voices cited the Torah to justify slavery, while others led the abolitionist movement.

Come celebrate Passover in 1862. Join the African-American spy network. Watch the destruction of Richmond. Next week at One JCC Reads.

Kathryn has spent her professional life writing about, teaching, and presenting the arts. Founding Director of the Boulder Jewish Film Festival, Kathryn was Director of Menorah and ACE at the Boulder JCC from 2003 through August, 2019. The former film and theater critic for the Boulder Daily Camera, Kathryn is the author of "The Fifty Greatest Jewish Movies" and "The Fifty Funniest Films of All Time." kathryn.bernheimer@gmail.com
Previous Colorado Attorney General To Speak at JBG
Next Evening of Israel Summer Trips