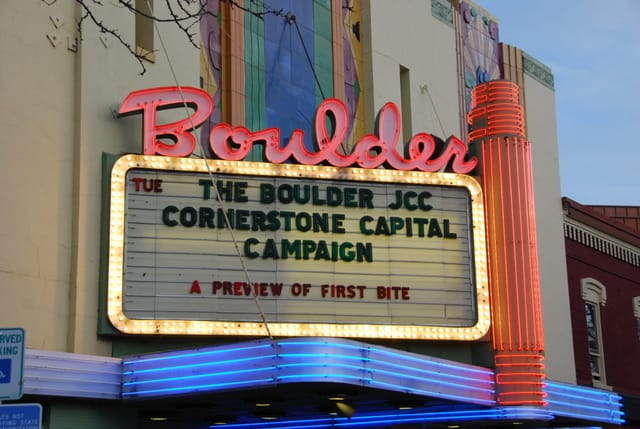 BJCC Building Campaign Closes in on 100%

Kathryn Bernheimer October 30, 2012 News Comments Off on BJCC Building Campaign Closes in on 100% The message came through loud and clear at the Boulder JCC’s 2nd Annual Cornerstone Capital Campaign event held Tuesday night at the Boulder Theater, a Preview of First Bite Boulder.

The event, which showcased the fun and camaraderie of the BJCC, was as much about well-deserved congratulation as it was about coming a few last steps closer to closing the campaign.If you have not yet lent your support to this historic campaign, this is your last chance to join the more than 500 individuals, families, and foundations who have brought the $18 million campaign so close to completion.

When the high-spirited evening began, the $18 million campaign stood at $17.2 million. Thanks to a matching grant from the Sturm Family Foundation (with the participation of ANB Bank), the campaign needs to hit $17.5 million before the end of the year in order to activate the match and reach its $18 million goal.

After years of dreaming, scheming, working, soliciting, discussing, designing, doing all the hard work it takes to make this dream come true, the new Boulder JCC is happening,” BJCC Executive Director Jonathan Lev says. “And it is happening because people are donating. We are in the very final stage. This really is the last chance to donate.”

Susan Rona, the Cornerstone Capital Campaign co-chair, echoed Lev’s theme. “How many ways can we say it? The time has come to step up to the plate. It’s last call. The clock is ticking. We have until Dec. 31 to reach this goal. You don’t want to miss this chance for your dollars to make a huge impact. We want everyone to be a part of this.”

The most creative, and humorous, way of saying it came in an outrageous video created for the event, performed by JCC staff, board and community members. In this spoof of Michael Jackson’s “Beat It,” the chorus lyrics were changed to “Donate. Just donate. Get your checkbooks out and don’t wait. Show your love for the JCC. Think how great our new building will be. Just donate.”

For many of the more than 400 who attended, excitement was coupled with amazement. After such a long time in the planning process, some community members admit they had begun to wonder if the new JCC would ever become a reality. But today all doubts have been replaced with certainty. Boulder will have the JCC it deserves.

The event was more than a fundraiser. It was a celebration. Community members sampled food from nine First Bite Boulder restaurants as well as caterers Spice of Life and Sweet Pea Cuisine, and tried the signature drink, the Tzedakah Sunrise. They also got a good look at the exterior of the new building, in the form of a five-foot Lego model designed to scale.

Following a short video update on the campaign and an even shorter presentation by Jonathan Lev, the crowd stayed to dance to Sambadende. And to celebrate.

Kathryn has spent her professional life writing about, teaching, and presenting the arts. Founding Director of the Boulder Jewish Film Festival, Kathryn was Director of Menorah and ACE at the Boulder JCC from 2003 through August, 2019. The former film and theater critic for the Boulder Daily Camera, Kathryn is the author of "The Fifty Greatest Jewish Movies" and "The Fifty Funniest Films of All Time." kathryn.bernheimer@gmail.com
Previous The Original Rock and Roll Rabbi
Next Results and Pictures from Boulder JCC First Bite