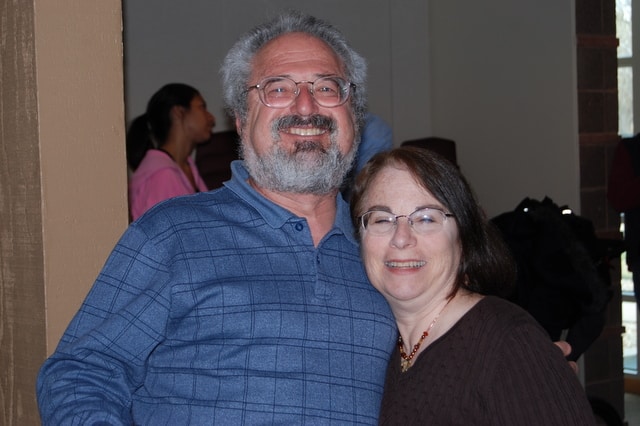 Congregation Bonai Shalom’s Religious School was delighted to honor Jerry and Marilyn Pinsker last Sunday for their many contributions to children’s education, both at Bonai Shalom and within the wider community. Marilyn and Jerry are both well-known, now retired educators within the Boulder and greater Denver communities.

Marilyn started teaching pre-school at the Bonai Hebrew School in 1982. She taught Bonai pre-school at various locations around town including Center for United Ministers on CU, Hillel, her home (!) and in the old building until 1987. In 1987 she became the school principal and she continued in that position until 1995. Marilyn continues to consult to the school and facilitated a teacher training last August.

Jerry served as synagogue president from 1987 – 1989, overseeing the construction of our then new sanctuary. Stepping down as president, he took on the position of chair of education which he retained until 1995. Jerry served in various positions on the Bonai Shalom board of directors for 26 contiguous years.

Jerry and Marilyn were honored with an ice cream social, filled with friends, relatives, and both the parents and children of the Religious School. Rabbi Marc Soloway saluted the Pinskers as builders of the community. Steve Hill, who holds the education chair, and Larry Cohn, synagogue president, both spoke of their many contributions to the community and of the strong base they created for our school. Everyone (but especially the students) enjoyed the ice cream.