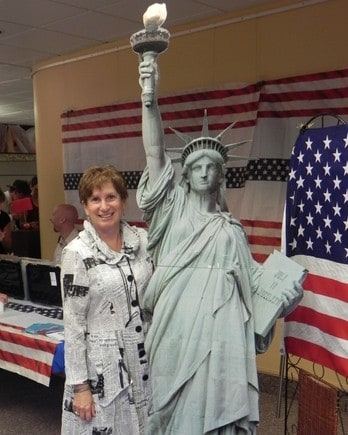 Menorah’s “New York, New York” event Sunday night in Boulder had all the hallmarks of a great party — good food and drink, a large turnout, and a short, fun program, followed by dancing and general merry-making.  A typical night out in New York!   Cosmos were the drink of the evening, and the food honored all the best Jewish neighborhood food of New York: Chinatown, Little Italy, and deli.  They even made egg cremes on request, and dessert included black and whites, rugula, and what else: New York Cheese Cake.

The night’s honoree, Professor David Shneer of the Jewish Studies Program at the University of Colorado, Boulder, spoke on the theme of “gratitude,” with love and some awe about coming to CU and becoming a part of the Jewish Community here… including partnering with Menorah on their MoVeRs programs over the last three years.  Shneer also mentioned the large number of students currently enrolled in CU’s Jewish Studies program — 700 — and that his department chair, Professor David Boonin, was making progress in promoting Jewish Studies from a certificate program to a full major program.

Here are pictures from our coverage of the event:

I've been writing things since grammar school, and served as a writer, photographer and/or an editor on my junior high and high school newspapers; the Daily Trojan at USC (where I earned my journalism degree); the student newspaper at the Anderson School at UCLA (where I earned my MBA); and written and edited countless business documents and presentations in the ensuing twenty years. I've been involved Jewishly since my bris and in Boulder since 1995. I'm married to my Executive Director Cheryl, and we have two children, Lauren and Ethan.
Previous Stein To Be Honored with Multicultural Award
Next ADL, One Colorado, Keshet Condemn Alleged Wellington Hate Crime