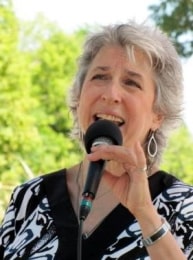 Faye Nepon was already an accomplished pianist and singer when her fascination with Europe led her to Italy in 1979, where she quickly began singing with prominent Italian jazz musicians and discovered Italian song.

When her daughter Rachel began attending pre-school at the Jewish Community of Florence, Faye was drawn into the rich and varied world of Jewish song—from the ancient Sephardic, Ashkenazi and Italian to the more modern Israeli and American. This new-found passion for Jewish music resulted in years of performances throughout Italy, Europe and the USA.

Nepon performed with internationally known musicians such as Igor Polesitsky, Joel Hoffman, Mauro Grossi, David Bellugi and Ivano Battiston. Because of her versatility and experience performing in duos, trios, ensembles, and orchestras, she co-founded the trio Shir-Am 3, the Gebirtig Trio and the ensemble Trialogo.

Faye Nepon is the Boulder JCC artist in residence during the 2010-2011 season, a residency made possible by the Lisa Antosofsky Memorial Fund honoring the Boulder singer, flautist, percussionist, music teacher and teacher of Judaism and spirituality who lost her 10-year battle with breast cancer in 2003.

Faye’s first appearance at the Boulder JCC is, fittingly enough, at Menorah’s “Celebrating the Jews of Italy” program on Sunday, November 7 at 5:00 pm. The evening includes a film, a feast, and a concert of Italian Jewish music. Accompanied by Sheldon Sands on piano and an Italian violinist, Nepon will sing and discuss the history of Italian Jewish music as well as her personal experience living in Italy for 25 years.

Faye will also perform with Sheldon Sands and the Boulder Klezmer Consort at Crazy for Klezmer, with national klezmer artist and ethno-musicologist Yale Strom, on Saturday, November 13 at 7:00 pm at the Boulder JCC.

Kathryn has spent her professional life writing about, teaching, and presenting the arts. Founding Director of the Boulder Jewish Film Festival, Kathryn was Director of Menorah and ACE at the Boulder JCC from 2003 through August, 2019. The former film and theater critic for the Boulder Daily Camera, Kathryn is the author of "The Fifty Greatest Jewish Movies" and "The Fifty Funniest Films of All Time." kathryn.bernheimer@gmail.com
Previous Artist Yael Kanarek at CU
Next Election Wrap-Up, Jewish Style