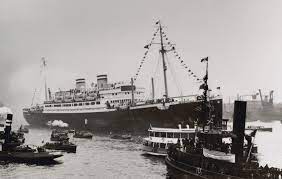 The Fateful Voyage of the St. Louis: A Discussion with Paul Shankman at the Boulder JCC

Jill Lowitz March 30, 2022 Events Comments Off on The Fateful Voyage of the St. Louis: A Discussion with Paul Shankman at the Boulder JCC

Join Paul Shankman and Joan Nagel at the Boulder JCC for this moving in-person presentation about the international refugee crisis in Europe in the late 1930s, and the story of one of the passengers who survived the fateful voyage of the St. Louis.

In 1939, the luxury liner MS St. Louis began a voyage from Hitler’s Germany to Cuba with 937 Jewish refugees on board. With landing permits secured, these refugees looked forward to safe passage. But on reaching Cuba, most of the refugees were turned away. Subsequent pleas to the U.S. government for entry were refused, and the St. Louis was forced to return to Europe where many of the passengers perished in the Holocaust.

Paul Shankman is professor emeritus at CU-Boulder and teaches a course on the Holocaust. He received his Ph.D. from Harvard in 1973.  Paul will be joined by Joan Nagel, a retired Boulder attorney whose father’s uncle and family were passengers on the St. Louis, and Sandra Saltrese-Miller, a Boulder attorney who has specialized in immigration cases, including deportations, for decades.

The cost of this event is $10. Please REGISTER HERE.