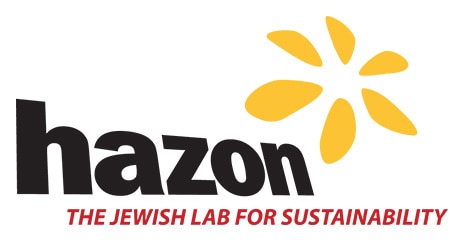 In a first-of-its-kind mobilization, 20 major Jewish organizations announce the formation of the Jewish Climate Leadership Coalition, which will bring together Jewish community leaders and organizations who recognize the existential threat and moral urgency of climate change and commit to taking action.

To date, 20 national and international Jewish organizations have signed onto the Coalition Founding Statement, publicly articulating broad consensus that collective climate action is necessary and that the Jewish community is responding. The founding partners (listed below) represent networks connecting the vast majority of North American Jewish institutions and with collective reach of hundreds of thousands of Jews each year.

Hazon, the leading Jewish environmental organization, is convening the Jewish Climate Leadership Coalition in partnership with its 20 founding signatories.  All Coalition members will develop and release Climate Action Plans annually, detailing climate actions taken to-date and setting strategic goals for the coming year, including reducing greenhouse gas emissions through a variety of strategies and interventions, as well as multiplying impact in the areas of education, advocacy, and finance. Coalition members will receive support through peer networks, one-on-one consultation, and be eligible for funding in the form of interest-free loans and matching grants through Hazon’s new Jewish Climate Action Fund.

“It is undeniable; the climate crisis is here, wreaking havoc upon our communities, and especially those most vulnerable in our society,” says Jakir Manela, Hazon CEO. “We are forming this coalition in order to firmly, collectively, and continually ask and answer the question: what are we going to do about it?”

“If the North American Jewish community were a country, its greenhouse gas (GHG) emissions would be larger than that of 162 countries!1  This is an existential planetary crisis, but also a profound opportunity to come together. It’s time we tackle this challenge with the full force of the Jewish community.  We need all the ingenuity, resilience, resourcefulness, wisdom, and perseverance of the Jewish people.  We need everyone.”

Adam Lehman, President and CEO of Hillel International, says: “Climate change is a cross-generational challenge, which will require the leadership of young people to address. We’re grateful to Hazon for building momentum across the Jewish nonprofit sector with the Jewish Climate Leadership Coalition, and we’re eager to harness the energy and creativity of students at Hillels around the world to work toward solutions.”

Doron Krakow, President and CEO, JCC Association of North America, says: “Climate change has enormous implications for all of us, and for the Jewish community to achieve progress toward slowing this change requires a coalition equal to the task. Together as the JCC Movement, the JCCs of North America form the continent’s largest platform for Jewish life—serving as the local community’s Jewish town square and its embassy to the wider world. Our movement is honored to join hands with such esteemed allies and partners to prevent further harm to the planet.”

The Jewish Climate Leadership Coalition is publicly launching September 15, 2022 and is open to Jewish organizations everywhere. Interested parties are encouraged to visit hazon.org/coalition to learn more. There is no cost to join the Coalition.

Founding partners of the Jewish Climate Leadership Coalition include:

Hazon is the national organization leading the Jewish environmental movement, weaving sustainability into the fabric of Jewish life in order to create a healthier, more sustainable, and more equitable world for all. Now in the process of merging with the Pearlstone Center in Baltimore, Hazon and Pearlstone collectively impact over 50,000 annual participants through immersive retreats, Jewish Outdoor Food Farming & Environmental Education (JOFEE), and climate action initiatives.

Hazon is America's largest Jewish environmental organization. We create healthier and more sustainable communities in the Jewish world and beyond. Hazon in Colorado is led by Becky O'Brien, Boulder Director and Sarah Kornhauser, Denver Director.
Previous Local First Responders Honored on Anniversary of 9/11
Next Join Us for Rosh Hashanah Dinner Under the Stars