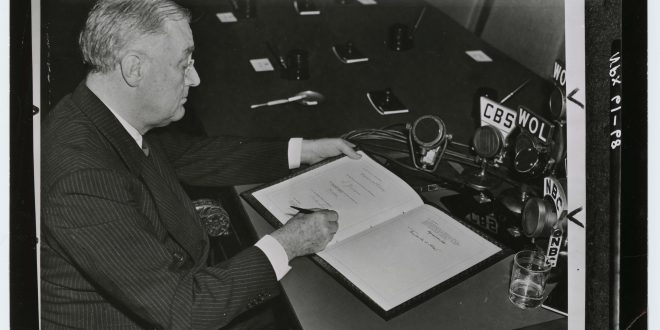 If Ken Burns ever finds the time to write his memoirs, he already has a title in mind: “Waking the Dead.”

The title refers to a revelatory observation made by his psychologist father-in-law many years ago. He suggested to the acclaimed filmmaker that his cinematic excursions into the past were an attempt to bring back the dead, in particular Burns’ mother, who died when he was 11 after a long battle with breast cancer.

In “The U.S. and the Holocaust,” Burns brings alive the memory of six million souls who perished in the fires of hatred.

Death may be final, but thanks to the work of historians, perhaps not so final after all.

Carrying on the “never again” mission of the United States Holocaust Memorial Museum, Burns was inspired by their exhibit, “Americans and the Holocaust” to tackle such an enormous, and enormously important, subject.

A fascination with American history is what has always motivated Burns, at 69 arguably America’s best known documentary filmmaker with some 40 titles to his credit, but he regards himself as a storyteller first and foremost.

“What I like is the ‘story’ in history, and the more complex the story the better,” Burns explains during a recent telephone interview prior to the release of the three-part series, airing on PBS September 18-20. The first episode of “The U.S. and the Holocaust” premiered at the Telluride Film Festival on Labor Day weekend.

Burns has consistently and expertly peeled back layers of the American story by delving deeply into popular culture with subjects as diverse as jazz, baseball, the national parks, and country music. He has explored in detail the conflicts that defined us as a nation – Vietnam, WW II, and the Civil War. He has profiled legendary American figures whose lives shook up our world – Jackie Robinson, The Roosevelts, Benjamin Franklin, Mohammed Ali.

It was in some ways inevitable that Burns would eventually feel drawn to what he calls “the most important event of the 20th century.” His interest had, in fact, been piqued while making a segment on the Holocaust for “War,” and Burns began discussing the idea with his team even before he was approached by the USHM.

It was also inevitable that he would focus on the role America played in the genocide, a subject not well covered in the vast Holocaust literature, with a few notable exceptions. The question of whether America could have done more to rescue the Jews of Europe was one Burns felt was worthy of dedicating seven years of his life answering.

Along with his longtime collaborators, Jewish co-directors Lynn Novick and Sarah Botstein, Burns decided to weave the question of America’s response together with a depiction of the Nazis’ systematic murder of European Jewry. Context is key, and Burns sets the stage by beginning in America years before Hitler came to power. The film then covers well-known major events such as Kristallnacht and the Wannsee Conference with the thoughtfulness and thoroughness audiences have come to expect from Burns. Much-appreciated attention is also paid to lesser known figures who loom large in the story – Peter Bergson, Ben Hecht, Jan Karski.

Although Anne Frank’s is the best-known story Burns revisits, he points out that he was able to include new information that builds a case for the tragedy of stymied immigration and the moral failure of the U.S. to take in more than a small quota of refugees. Otto Frank, it turns out, was one of the many desperate souls whose request to immigrate was turned down. Had the Frank family been allowed to immigrate, Anne’s fate would have been much different.

Burns also spends much of his six-plus hours of screen time on personal accounts by survivors and their families. Had he not, the documentary could be a series of statistics and generalities.

“The number ‘six million’ is so opaque,” he says of his inclusion of survivors whose stories help humanize the unimaginable horror. “Our job is to particularize, to make sure the world knows these people lived, that they existed. It’s our obligation to remember.”

Burns also uncovers uncomfortable connections between American and Nazi ideology, providing a context in which to consider both public sentiment and governmental response.

The conclusions Burns reaches after a full analysis of the information available to him are sure to shock some people who view America as the valiant victor over fascism – and fall short of being shocking enough for others who consider American indifference during the decimation of world Jewry inexcusable.

In addressing America’s failure to do more, Burns is adamant that Americans cannot hide behind the ‘we really didn’t know’ excuse, as his film spends ample time proving. However, he also believes that Roosevelt is not the antisemitic villain he has sometimes been made out to be, and that it was simply not possible for him to waive a magic wand and change the fate of the passengers on the SS St. Louis or to increase America’s staggeringly low immigration quotas.

Other antisemitic villains in the U.S. government, such as Breckinridge Long, are indeed outed by Burns. But the real culprit, according to Burns’ research, was public sentiment.

“Even after the liberation of Buchenwald was shown on newsreels, only 5% of Americans wanted to let in more refugees,” Burns says. “We could have yelled louder, and saved more people, but it was the American people who didn’t want to do this.”

Burns and his team, no strangers to disturbing footage having worked on projects such as “Vietnam” and “War,” found it heartbreaking to work on the Holocaust material. Burns says he found himself crying at certain points in the narrative, moved, for example, by Varian Fry’s rescue of legendary figures such as Chagall along with 2,000 others.

The team decided to avoid showing the more horrific images available to them, “because I don’t believe in war pornography,” Burns explains. “We don’t want to just shock people. We want to shock audiences into sensitivity.”

Burns also hopes that audiences come away with a renewed appreciation for democracy – as frustrating as that system of government might be. Authoritarian governments, without exception, have resulted in tragedy and bloodshed. The importance of preserving democracy was increasingly on his mind during the years he spent making what he calls a “true labor of love.”

Professor Deborah Lipstadt, the recently appointed Special Envoy to Monitor and Combat Antisemitism, observes on camera that the time to stop a Holocaust is before it happens, and it is a message Burns takes to heart.

“Everyone who worked on ‘The US and the Holocaust’ felt a responsibility not just to the past but also to the future,” Burns says, adding that the lessons of the Holocaust are far from exhausted. “This is the most important project we will ever work on.”

Kathryn has spent her professional life writing about, teaching, and presenting the arts. Founding Director of the Boulder Jewish Film Festival, Kathryn was Director of Menorah and ACE at the Boulder JCC from 2003 through August, 2019. The former film and theater critic for the Boulder Daily Camera, Kathryn is the author of "The Fifty Greatest Jewish Movies" and "The Fifty Funniest Films of All Time." kathryn.bernheimer@gmail.com
Previous America and the Holocaust: A Filmmaker’s Perspective
Next Baruch Dayan HaEmet – Florence Lavin z”l

The Colorado Hebrew Chorale presents “Just in Time for Rosh Hashana” on Sunday, Sept. 18, 2022, at the Golda Meir House Museum, on the Auraria Campus in downtown Denver.