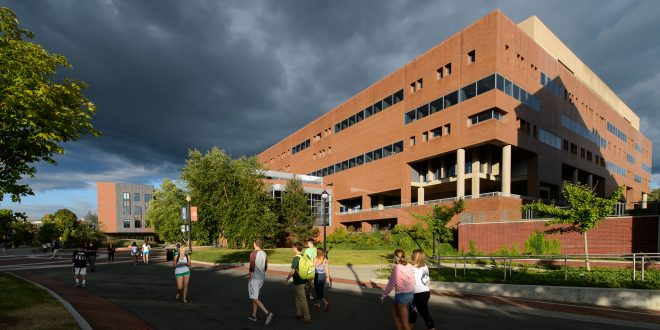 Bruce Ticker March 31, 2022 Guests and Blogs Comments Off on Column: Tormenting Natalie, After She Challenges Anti-Israel Posting at UConn

Natalie Shclover displayed courage and integrity when she confronted Israel-bashing at the University of Connecticut (UConn) a month ago, yet she made an error in judgment that boomeranged on her and offset a more productive outcome.

In an “open letter” posted by The Times of Israel, Shclover recalled spotting posters protesting UConn’s economic relationship with Israel scattered throughout the library in a manner violating school policy for distributing posters. With her boyfriend, she returned later in the day, last Feb. 28, to remove all the illegal posters and was videotaped doing so. That triggered a month of torment for her, especially her inexplicable expulsion from a campus a cappella group.

Shclover was justified to challenge them, but she went about it the wrong way. She took on too much by herself. My feeling is that she should have asked the administration to clear out these posters, and if they refused she could take it from there.

The campus newspaper did report the perspective of some Muslim students, who were appalled that Shclover and her boyfriend removed the posters and claimed that the couple harassed them.

This writer, in pointing out her mistake, is hardly nitpicking. Jewish response to antisemitic episodes are flimsy enough, and when we respond we need to do so both wisely and forcefully. We must put the Israel-bashers on the defensive and deny them space to turn it against us – which is what happened to Shclover. So far.

Shclover, a senior at UConn, still has a few routes open to her to reverse the situation. Mostly, she can report the matter to the state Attorney General’s office or other law enforcement agencies because it appears to me (not an attorney) that pro-Arab activists committed low-level crimes. Bias crimes, in fact.

She should also demand that the administration investigate her ouster from the UConn Chordials, an a cappella group that she joined as a freshman and for which she earlier served as president.

While she is at it, she might wish to recruit help from elected officials, anti-bigotry organizations and Jewish leaders.

She reported in her letter that UConn President Dr. Radenka Maric touched off the chain of events in mid-February when she announced plans to further the university’s cooperation with Israel during an upcoming visit there.

Shclover said she found the library covered with hundreds of fliers when she arrived there on Feb. 28 to study. “They pictured a map of Israel with red and green on either side,” she wrote, “an image of our university president on the left, and a disturbing image of a child being strangled on the right. It stated, as fact, that Israel is an apartheid state, and that the university’s recent ventures show complacency with an apartheid regime.”

In violation of UConn rules, the posters covered the floor, were spread out on every table and even taped to the insides of printers, she wrote. University policy designates “which areas are appropriate for posting fliers to prevent campus buildings from becoming several story billboards for any one message,” she added. After a check with Student Services and the guidelines, she wrote that “it’s acceptable to move improperly placed posters aside or even discard them.”

Another provision might be interpreted to support Shclover’s claim that she could remove illegal posters: “The library is not responsible for posters being removed by the public.” Even if she had the right to discard them, would it be wise?

She returned later with her boyfriend, Zacharia El Tayyeb, and they removed fliers until they encountered four women with whom the couple attempted to explain their actions. She noted that El Tayyeb is a Muslim of Jordanian descent.

“The situation escalated,” wrote Shclover, who graduated from the Jewish High School of Connecticut in Stamford. “The students began a verbal attack on Zach and me, calling me a ‘Jew,’ a ‘f*cking b*tch,’ a ‘white supremacist’ and a ‘f*cking Zionist.’ As we’d find out later, this portion of the incident was being recorded.”

The video went viral among UConn students after it was posted to Instagram and TikTok, she recalled. “The video was falsely captioned on many accounts with claims that we had been harassing Muslim students in the library,” she wrote.

The Chordials dismissed her, “without any due process or chance to voice my side of the story,” she wrote. She recounted receiving “hundreds of hateful messages” calling her bigoted, racist, a b*tch, a disgusting human being and a “dirty f*cking Jew. “One claimed to have emailed my future employer,” she wrote. “Another publicly posted my campus address to YikYak, threatening my physical wellbeing and exposing me to yet another vector for harassment.”

Even friends and classmates tormented her, she wrote. As of posting her letter on March 19, she wrote that the university had not contacted her two weeks after she filed her bias incident report. “I alerted campus police to the harassment, but I knew there was only so much they could do,” she noted.

The newspaper, called The Daily Campus, confirms that Israel is labeled “an apartheid state” on the poster, distributed by the Muslim Student Association.

The Daily Campus reported that Muslim student Nour Shraiki and her friends were sitting in the library when a student approached them and asked about one of the posters, and Shraiki said she was handed the poster earlier; she added that she was not involved with the poster distribution.

The news article stated, “Shraiki claims the student then proceeded to rip two more posters off a nearby bulletin board, crumpling and throwing them. Soon after, another student approached the group and defended the first student, saying that if she had put up an Israeli poster, Muslim students would have probably taken them down, according to Shraiki.”

The article continued, “Shraiki also said that as the two students were walking away, one of them said, ‘I hope you find peace. Go pray your five prayers.’” They felt as if their religion was being mocked, according to the newspaper.

Shclover affirmed that her boyfriend commented on their faith, writing, “Zach…identified himself as a practicing Muslim and urged the students to seek peace in prayer.” Was her boyfriend’s comment necessary?

Still, Shraiki confirmed that MSA violated posting rules. They are allowed one poster per bulletin board, and Shraiki said that the student removed two posters.

The Daily Campus reported that Khaleel Rahman, MSA vice president, said she hopes Muslim students would not remove pro-Israel posters. “I understand many students on campus disagree with our efforts, but we still expect to be treated with civility and respect,” she said. “UConn MSA would never encourage our members to rip down another club’s flyers, even if we disagreed with the content.”

The UConn Chordials released a statement on March 4, the newspaper reported, saying the group’s members “do not tolerate behaviors that cause pain, distress or damage to others, especially those of a different race, ethnicity, nationality or religion. What happened today was extremely unacceptable.

“These actions do not reflect the beliefs of the UConn Chordials as a whole, or the UConn a cappella community. We sincerely apologize for the actions of our former president. We hear you, we take accountability and we promise to show you that we are better than this moving forward.”

Even Jack the Ripper would have been allowed a chance to defend himself. Of course, he did not violate political correctness. If they asked Shclover for her side, what would they have done about her concerns about the poster?

Students might have protested their removal, anyway, but they could not get personal with the administration as they did with Shclover.

University officials should have responded immediately to her complaint, not after two weeks or more. She said she was threatened. Someone could have harmed her. They should have taken steps to put a stop to the harassment from the outset.

Now Shclover has the opportunity to challenge transgressions that are far worse than violations of poster-placement policies.

Her top priority is to check with law-enforcement agencies, probably starting with the state Attorney-General’s office if crimes were committed that should be prosecuted. These offenses would encompass bias crimes because her tormentors referred to her in ethnic and religious terms. She knows many people who badgered her, so she might be able to identify students who actually violated the law.

It would help her a great deal to seek help from such Jewish organizations as the Anti-Defamation League and the local Jewish Federation. They can counsel her, perhaps represent her and refer her to other resources to assist her. She can also contact the governor’s office, her state lawmakers and UConn’s board of trustees.

Shclover can also inquire about civil remedies. She could file a complaint with an anti-discriminatory agency like the federal Equal Employment Opportunity Commission. Or consider a lawsuit.

The university should investigate her termination by the Chordials. What did her politics have to do with music? What were they thinking, if they were thinking at all? Those found responsible should be punished.

Shclover’s parents – who grew up in the former Soviet Union and moved to America during the nineties – “did not have the luxury of condemning the oppressive regime that governed their lives,” she wrote.

At this stage, Shclover has the opportunity to test if the state of Connecticut is not “oppressive” like UConn has proved to be.

UPDATE: The university has announced that campus police found that no crimes were committed during the Feb. 28 incident, The Algemeiner website reported. Nothing was mentioned about subsequent events. The Anti-Defamation League has since voiced concerns about the situation, according to The Algemeiner.

Bruce S. Ticker, who writes from Philadelphia, also blogs for The San Diego Jewish World and Smirking Chimp and previously for the suspended Philadelphia Jewish Voice. He was previously a reporter and copy editor for daily newspapers in eastern Pennsylvania.
Previous Weekly Edition: April 1st, 2022
Next Local Leaders Tackle Social Issues in Israel